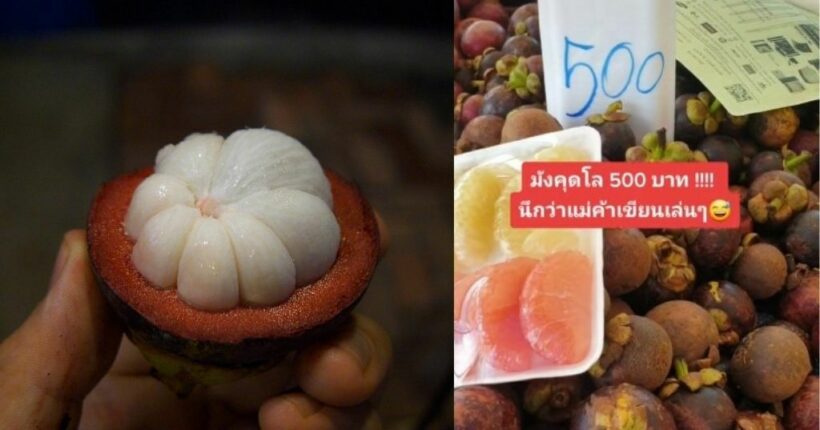 A Thai TikToker has shared a video of a street vendor in Phuket selling mangosteens at the rather steep price of 500 baht per kilogram, considered too expensive for Thai people (or anyone for that matter).

The Tiktoker said she didn’t mean to offend the seller by claiming that the price was ridiculously high, but merely sought out other people’s opinions about the price. Not surprisingly she found that her viewers also thought it the mangosteens were overpriced.

The video features a local fruit vendor spruiking various kinds of fruits, but the footage focuses on the pile of mangosteens with a surprising sign advertising the price at 500 bt per kilo. In the video, a women’s voice asks the seller… “how much is the original price?” The reply… “the cost price is already 300 baht per kilogram because it is not the season for mangosteens”.

The woman who recorded the video said that the ‘street’ style shop was at Surin Beach in Phuket, usually a popular location for foreigners when they visit the island.

At first she thought the price was just a joke, but the seller confirmed that it was real.

The seller eventually changed the price to 400 baht per kilogram after around 4 hours passed, which was still a premium price in her opinion. The TikToker added that she thought the price shouldn’t be higher than around 100 baht per kilogram. Bottomline… she didn’t buy any mangosteens.

Many users shared their opinions under her video. Some say that the tourists were willing to pay for it, and the seller wasn’t forcing anyone to buy, while the others agreed that it was WAY overpriced.

Thai media have since interviewed a fruit farmer in Nakhon Si Thammarat about the mangosteen price. The farmers shared that the price might be high because it wasn’t in season, and its season will start from May onwards. But the 500 baht per kilogram was still too high.

AdvocatusDiaboli
On 2/22/2022 at 5:02 PM, Thaiger said: A Thai TikToker has shared a video of a street vendor in Phuket selling mangosteens at the rather steep price of 500 baht per kilogram, considered too expensive for Thai people (or anyone…