Partygoers who went to any of the Kolour Beachside parties in Phuket last weekend are asked to go to a local hospital for a Covid-19 test. The parties hosted more than 3,000 people, drawing concern after an attendee tested positive for Covid-19. The Phuket Provincial Government and Phuket Provincial Public Health Office released a statement yesterday advising all partygoers to get tested.

Those who attended the Kolour parties from April 2 to 3 at Shelter Phuket Dance & Night Club in Patong, Cafe Del Mar Phuket in Kamala and Illuzion nightclub on Bangla Road in Patong are asked to get tested.

The attendee who tested positive is linked to the Bangkok nightlife cluster of infections where bar hopping is said to have contributed to the spread of Covid-19 in the Thong Lor area.

So far, the Phuket health chief has confirmed 10 cases over the past few days. Health officials have not revealed a timeline for the cases, but say most cases are linked to “entertainment clusters” including at least 4 cases linked to venues in Phuket and 2 in Thong Lor.

Out of the 10 cases, the Phuket health chief reported 2 new cases today including a 29 year old Thai woman who worked for Krystal Club in Thong Lor. 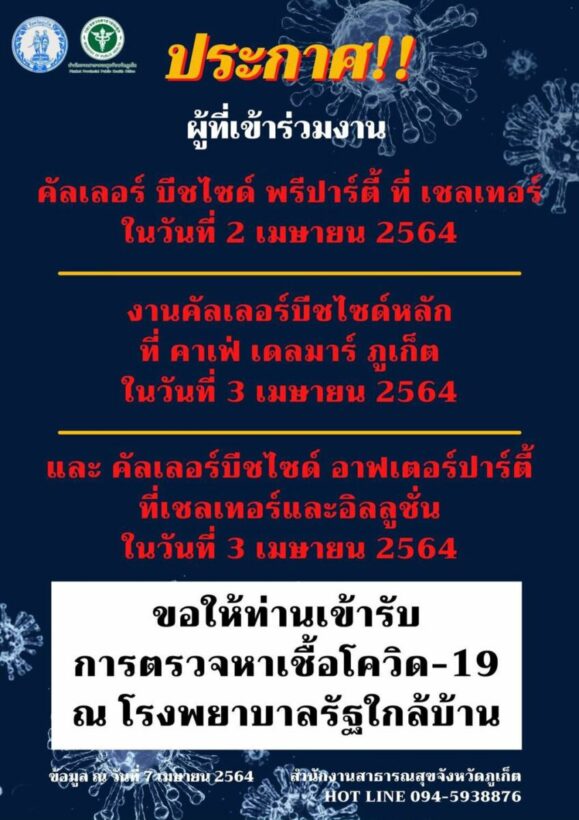