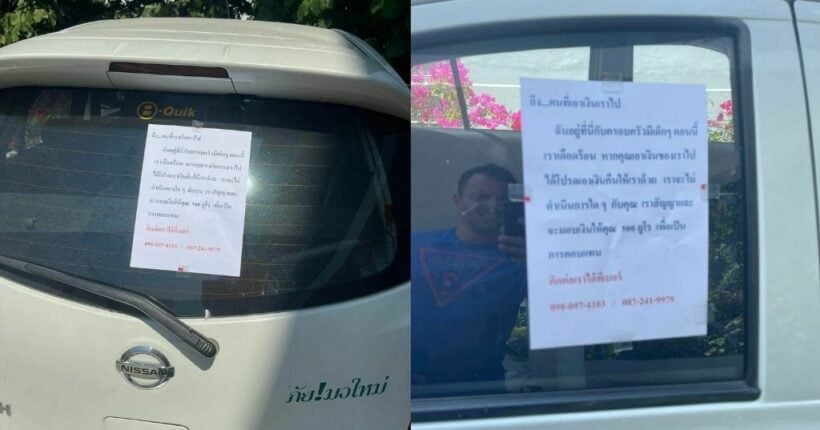 A note asking for the money to be returned. | Photo via Facebook/ Khamkaew Beer

A Greek family on a trip to Phuket claims around 200,000 baht in cash was stolen. Thai media reports that the family of five is asking for the money to be returned and are even promising to give the thief 500 euros if they return the cash.

The family filed a report with the police and asked the hotel to check the surveillance camera footage, but there have been no new developments. They asked a longtime Thai friend to help spread the word. The friend made a post on Facebook sharing the family’s story, adding that they are not wealthy and that they worked hard for the money.

According to the post, the family had decided to move their money to the car while the hotel maid cleaned the room. They didn’t have a safe in the room, so they assumed keeping the money in the car would be safe, but they forgot to lock the car and their cash went missing.

The family also printed out a message in Thai and stuck it on the rental car. The note says in Thai “To the one who took my money, we have children, and now we are in a hard time. Please bring our money back. We promise that we won’t report to the police and will give you 500 euros.”

Fundok
3 hours ago, PfizerModernaJohnson said: There is no prepaid credit card. prepaid and debit cards (difference is debit is locked to a bank account) Ok, right. Still it's a VISA card but yes, sorry for being a wee bit…
stapoz
Quote The story should be rounded out more as it was reported a few days ago. The guy wanted to leave it in the complex safe, but staff said he could not, but did warn him about leaving it in…
Leo
23 hours ago, danpeter said: Helps to explain why Greece is in the state it is, a cash economy where few pay taxes. They can look at it as a learning experience, keep money in bank & be good honest…
danpeter
On 2/3/2022 at 2:50 PM, Leo said: This incident helps to explain about Greece?! Glad to see things are "explained" for you. Here's a hint: this incident says a lot more about Phuket ("sir, no safe in room, safe in…
danpeter
On 2/2/2022 at 8:43 PM, ctxa said: Taxation is theft. Specially the way it works in Europe. He sure had a specific purchase in mind, he was on holiday for christ's sake! You need money while on holiday and you…