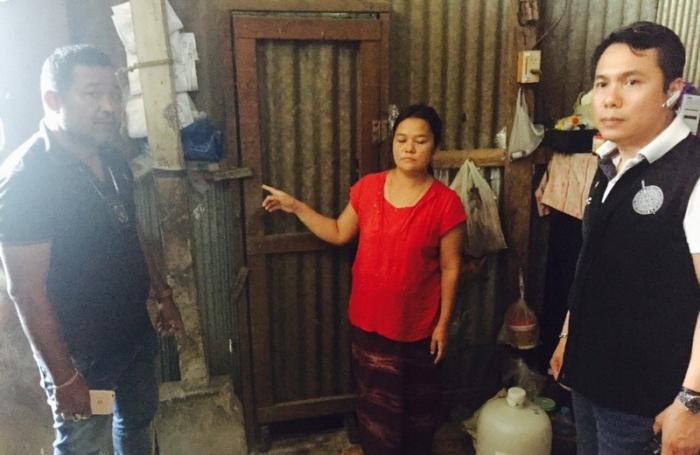 PHUKET: Phuket and Bangkok officials raided a dormitory in Koh Sireh yesterday to rescue 32 illegal Myanmar workers being held captive and forced to work without pay.

Officials were alerted to the dormitory after a worker, named only as Nai, escaped from the fishing boat they were forced to work on and swam ashore to call relatives in Myanmar.

“Mr Nai’s relatives contacted the Myanmar Embassy and Labor Rights Promotion Network Foundation,” said Phuket City Police Deputy Superintendent Khunnadet Nanongkhai. “When we were alerted to the situation, we joined forces with the Anti-Human Trafficking Division and the Royal Thai Police to search the dormitory.”

The raid netted Myanmar nationals Ma Yo, 38, who is one of two suspects accused of holding the 32 men captive.

Ms Ma Yo and her husband, Ko Pae, 36, face charges of unlawful gang detention, as well as a barrage of human-trafficking charges.

“Ms Ma Yo confessed that she and her husband collaborated with another agent in Prachuap Khiri Khan Province to recruit laborers to work in the fishing industry in Phuket. Her husband, who evaded arrest, deals with customers, while she maintains the books and cooks for the workers,” explained Col Khunnadet. “The men were prohibited from leaving or going outside, as they were undocumented.”

“We hope that in questioning the men who were held, we will be able to gain more information about the network,” Col Khunnadet said.

The discovery of the 32 men comes months after island officials declared that their two-month crackdown on human smuggling and human trafficking came up empty handed (story here).