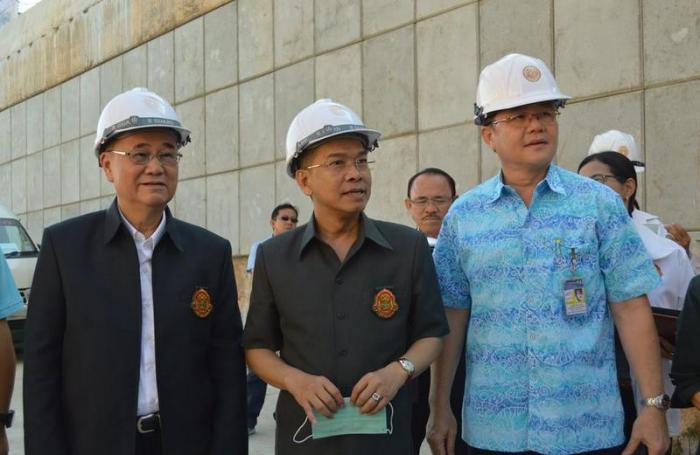 PHUKET: After months of delays, the Samkong underpass is expected to be open later this month and be fully operational by May, it has been confirmed.

Inspectors from the Ombudsman Office in Bangkok visited the construction site yesterday and confirmed the underpass should be open to traffic within the next few weeks.

Boon Tapanadul from the Bangkok Ombudsman Office was in Phuket to follow up on the progress of the already delayed project for which the contractor, Wiwat Construction Co Ltd, is currently paying a two million baht-per-day fine (story here).

“The underpass is a priority for both the local and central government. The construction company and officials must ensure that the construction site is safe and all applicable safety standards are followed,” said Mr Boon.

Mr Boon also ordered the construction company to make sure that the underpass is sufficiently lit to ensure the safety of motorists at night.

“I am aware that motorists are concerned about the progress of the underpass as it is already behind schedule. However, I am thankful for everyone’s efforts and hope it will be completed soon,” he said.

“I was told that it will be fully completed in May. The tunnel itself will be open to traffic this month, once the electrical system has been installed.”

He visited the site after heavy rains in January left a section of road running alongside the underpass, as well as one of its walls, heavily damaged (story here).