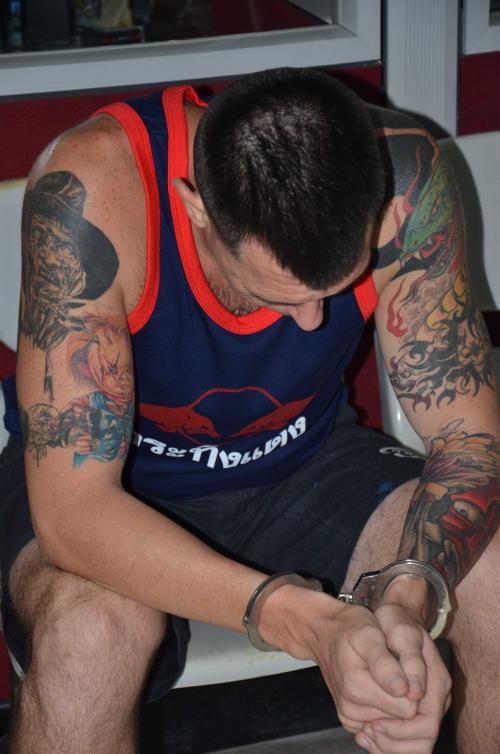 PHUKET: Two Australian tattoo parlor owners have been charged with attempted murder after opening fire with an unregistered firearm in the heart of Phuket’s party town, Patong, yesterday evening.

John Cohen, 32, and Adam Shea, 26, shot two German bystanders in their attempt to “strike first” against an alleged Danish mafioso, named by police only as “Dannie”.

“This is not a complicated case at all,” said Phuket Provincial Police Deputy Commander Arun Kleawwatee. “The suspects, afraid they would be attacked by a party that they were in conflict with, decided to strike first.”

Patong Police apprehended the two suspects within an hour of the 7:30pm shooting.

“We quickly arrested the suspects at the tattoo shop they are partners in on Bangla Road,” Col Arun said.

CCTV footage shows Mr Cohen and Mr Shea walking into many hotels along the street and asking the receptionist for Dannie, Col Arun explained.

“That’s when they spotted Dannie leaving the hotel on a motorbike. Both of them ran out of the hotel, and one of them opened fire with .38 handgun. However, they missed Dannie and hit two German tourists [in front of the Family Mart],” he added.

Both parties were expected to show up in court yesterday to resolve a dispute about a “big bike” worth about 300,000 baht. Dannie did not come to the hearing, Col Arun said.

During police questioning, Mr Cohen allegedly told police that Dannie had sent a group of mafia men to his Phuket home.

“He used to live in Pattaya before moving here. I was afraid he would shoot me since he did not show up at court. So me and my friend decided to make a move first,” Mr Cohen told police.

Both suspects have been charged with attempted murder and for illegal possession of a firearm.

Police are now scouring the island for Dannie.

The two tourists injured by the stray bullets fired in Soi San Sabai, off of Rat-U-Thit 200 Pee Road, were taken to Patong Hospital.

Mr Baschenegger arrived in Phuket around midnight on January 21.

“My friend Joseph arrived before me. We were hanging out in front of the hotel when we were both shot in the arm,” Mr Baschenegger said.

Col Chiraphat expressed his concern about how detrimental such an incident could be to Phuket’s vital tourism industry.

“The suspects opened fire in the middle of a dense tourism area and injured two innocent people. They have seriously tarnished Thailand’s reputation and must face the highest penalties under the law,” Col Chiraphat said.

This most recent episode of gun violence in tourism regions of Thailand falls on the heels of British national Stephen Ashton, 22, being shot dead by a stray bullet at a New Year’s Eve beach party on Koh Pha-ngan, near Koh Samui.