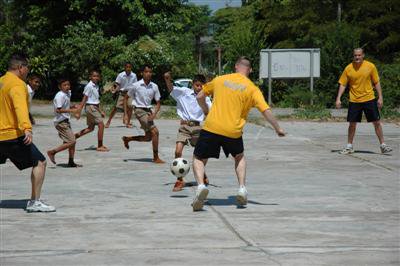 PHUKET TOWN: Servicemen and women from the aircraft carrier USS Nimitz and her two companion vessels USS Pinckney and USS Rentz have been painting the town in recent days, both figuratively and literally.

As part of the US Navy’s community relations work during their current visit to Phuket, a team of sailors yesterday painted the canteen at the Baan Ao Nam Bor School in Ao Makham, not far from where the carrier is anchored off Phuket Deep Sea Port.

Today is their last day in Phuket.

Other community relations, or ‘COMREL’ projects in Navy-speak, have taken place at schools in Kamala and Patong.

The events were organized by the Rotary Club of Patong Beach.

On Tuesday night members of the Phuket Navy League  hosted a welcome dinner for crew members at the BBQ Hut in Patong, where many sailors have been enjoying the nightlife.

Although some 6,000 sailors are now in their final day of liberty on Phuket, there have been no reports in the local media of them having any accidents or getting into fights.

Jimmy Madigan, President of the Phuket Navy League, said. “This has been a great visit, with no major problems. Some minor ones have been taken care of. These young women and men set an example we can all be proud of.”

Most sailors would spend ‘at least a few hundred dollars’ during their stay on the island,  USS Nimitz’s Captain Paul Monger said after the vessel’s arrival on Sunday.