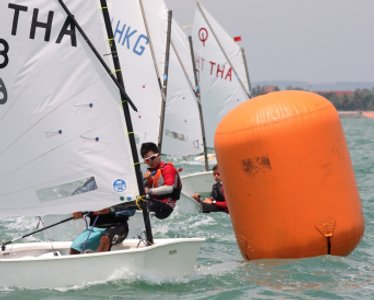 PHUKET: In a move to broaden the appeal of yacht racing and support youth sailing in the region, organizers of the Phuket King’s Cup Regatta have announced two major changes to the annual international event.

It was announced yesterday that, for the first time, in the regatta’s 24-year history, dinghies will race as part of the official King’s Cup Regatta (KCR) program.

Before this year’s King’s Cup gets underway on December 4, the KCR organizing committee will launch the Phuket Dinghy Series, consisting of four weekend events to be held September 25-26, October 30-31, November 27-28, and December 4-5.

The last event will be held as part of the 2010 Phuket King’s Cup Regatta, with the series winners to be presented top honors by HM The King’s personal representative at the King’s Cup Royal Awards Ceremony on December 11.

Each event in the series will consist of five races. The first three events will be hosted by the Sailing of Phuket school. Located at Tah Nun, next to the Sarasin Bridge, the school is run by Lt Crd Pornprom Sakultem of the Third Naval Area Command.

The move to have dinghies race at Phuket’s largest regatta follows the announcement earlier this month of another first for the King’s Cup: a one-off race that any boat with an IRC or OMR rating can enter.

The two-class-only race allows cruisers to take on the “grand prix” racers on a level-playing field.

“This is the first combined fleet race of its kind in Asia,” said King’s Cup Race Director Simon James.

Each class will compete for a separate trophy and the bragging rights of being the “IRC Winner” or “OMR Winner”.

The final day’s race does not count to the overall King’s Cup Regatta series, which this year will be raced over four days instead of the traditional five days.

“The IRC Combined Fleet Race on the final day of the Regatta is a great idea that will give the cruisers and cruiser/racers a chance to have a go at the flat out racers,” said Mike Urwin, Technical Director RORC Racing Office.

“IRC is firmly aimed at all types, sizes and styles of boat and so this is an ideal use of the rule,” he said.