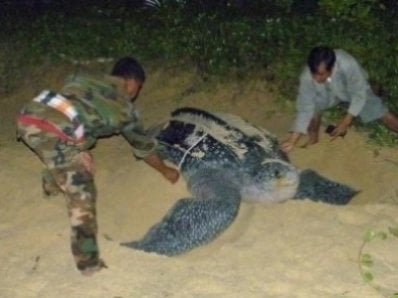 PHUKET: Hopes that turtles are returning to their traditional nesting sites along the Andaman Coast soared as a second clutch of leatherback turtle eggs was discovered on Tai Muang Beach in Phang Nga, just north of Phuket, within an eight day period.

The discovery of the nest on Tuesday follows a leatherback turtle being spotted laying eggs on the beach on December 3.

However, officers at the Khao Lampi – Hat Thai Mueang National Park, where both nests were created, believe that the two clutches of eggs were laid by different turtles.

“The turtle spotted on December 3 was 2.12 meters long, but tracks left in the sand from this second turtle indicate that it is much smaller than the first one,” said park officer Witoon Detpramuanphol.

The nest discovered by local villagers early Tuesday morning was located about 500 meters from where the first turtle was spotted on December 3.

“The nest contained 109 eggs: 99 of them are good, 10 are undeveloped. The good eggs have been transferred to a safe place. We expect them to hatch in about 60 days,” he added.

Mr Witoon said that he and fellow park officers will be monitoring the area in the hope that the turtles will return to lay more eggs.

“We believe that the first turtle will come back to lay more eggs sometime between today and Saturday, as leatherback turtles usually lay eggs twice, about 10 days apart,” he said.

“The first turtle laid 131 eggs – 99 of them had been fertilized, and 32 were undeveloped. We removed the fertilized eggs to a safe place near our checkpoint so our officers can look after them and keep them safe from predators, man or otherwise,” Mr Witoon explained.

“The number of people visiting Mai Khao and development in the area have forced many turtles to lay their eggs elsewhere,” he added.

The continual rise in tourist numbers and the expansion of beachfront development have deterred leatherbacks from returning to their traditional nesting sites along the Andaman Coast, resulting in turtle nest sightings becoming increasingly rare in the region.

“Leatherback turtles used to lay eggs every year at Mai Khao Beach in Phuket and here at Tai Muang, but the last time we saw this was in January 2010,” Mr Witoon said.

However, the recent return of leatherbacks to Tai Muang Beach is being heralded as good news, and Mr Witoon believes that more leatherbacks have already returned to the area to lay eggs.

“We have seen tracks from other turtles on the beach, so we may see more turtles coming ashore to lay eggs here,” he said.