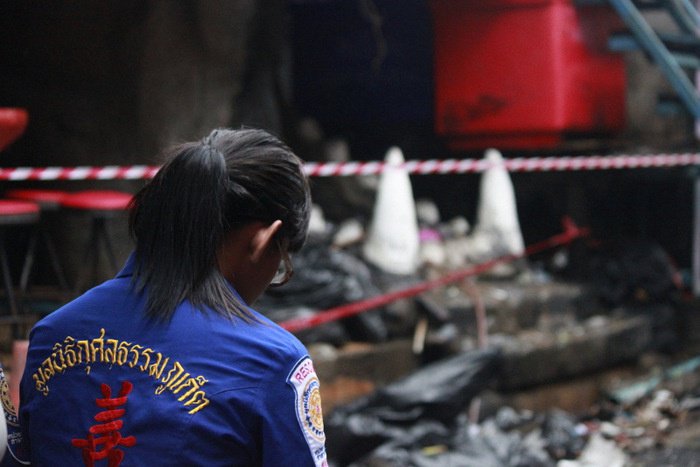 PHUKET: The first witness testimony over the deaths of four people in Patong’s notorious Tiger Disco inferno is set for April 23, Public Prosecutor Vivath Kitjurak has confirmed to the Phuket Gazette.

The trial will begin almost three years after the blaze claimed the lives of four people, including two tourists.

The popular nightclub erupted into flames at about 4am on August 17, 2012, while hundreds of patrons were still inside.

Tiger Group CEO Piya Isaramalai and Sara Entertainment Co Ltd each face a charge under Section 291 of the Thai Criminal Code: Causing Death through Negligence. They also face charges of causing physical and mental injury and trading after hours.

Both parties were formally charged on July 10, 2013, after a lengthy investigation and an appeal by Tiger Group legal counsel Thamrongsak Boonrak for a “fair investigation” (story here).

Both parties appeared in June last year to present the evidence they have. And Mr Vivath expected about six witnesses to testify (story here).

Mr Vivath, who has been the lead prosecutor in the case since the very beginning, will not present the case in court.

“My transfer has been approved, effective April 1, so another prosecutor will take care of the case,” he told the Gazette.

Pisitpol Phumsawat, Phuket’s chief public prosecutor, confirmed to the Gazette today that Mr Vivath will move to the Phuket Juvenile Court on April 1, and that he had yet to decide which prosecutor from his office will lead the trial.

“The case will be handed over to a new prosecutor at the beginning of next month,” he assured.

“It is now in the judges’ hands. I cannot predict exactly how long the trial will take,” he said.

No further safety measures at shooting range after tourist kills self