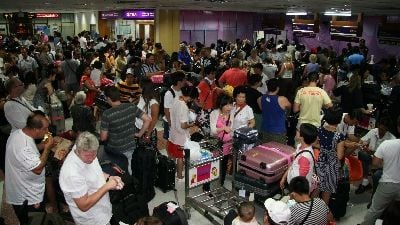 Marking the return of inbound flights at about 3:30 pm was the arrival of a THAI Airways 777 from Bangkok with more than two hundred tourists aboard, the first plane to land on the island since Peoples Alliance for Democracy protesters forced the airport to close on Friday.

As normality returned, the airport bus was spotted doing its rounds in Phuket City and airport limousines were seen hurtling down Thepkrasattri Rd towards the main tourist beaches.

However, police guarding access to the airport allowed only airport passenger vehicles through the main gate. Private vehicles were redirected to the southern entrance past the airport Customs house.

Finally returning home were Australian tourists Mr and Mrs Wilkin from Melbourne, whose departure had been delayed two days.

“We found out that we could go at about 3 o’clock this afternoon, “Mr Wilkin said. By 4:30, he and his wife were mid-queue in the crammed departures hall at the airport.

Despite the protests, Mr Wilkin said, “We’ve never felt threatened all the time we’ve been here. The only inconvenience has been finding out when we’re leaving, checking in and out of hotels, things like that.”

“Everyone understood what was happening and sympathized with what was going on,” his wife added.

However, Mrs Wilkin noted that many tourists who had arrived just before the protest were oblivious to what was going on.

Prime Minister Samak Sundaravej announced on public television on Saturday that he had no intention of giving in to the protesters’ demands that he resign.

In response, the PAD leaders have said that they will rally again to close the airport, along with Haad Yai and Krabi Airports, which were also forced to close by PAD protesters.

A source at Phuket Airport told the Gazette that she believed the protesters would return, saying, “They’ll be back, soon.”