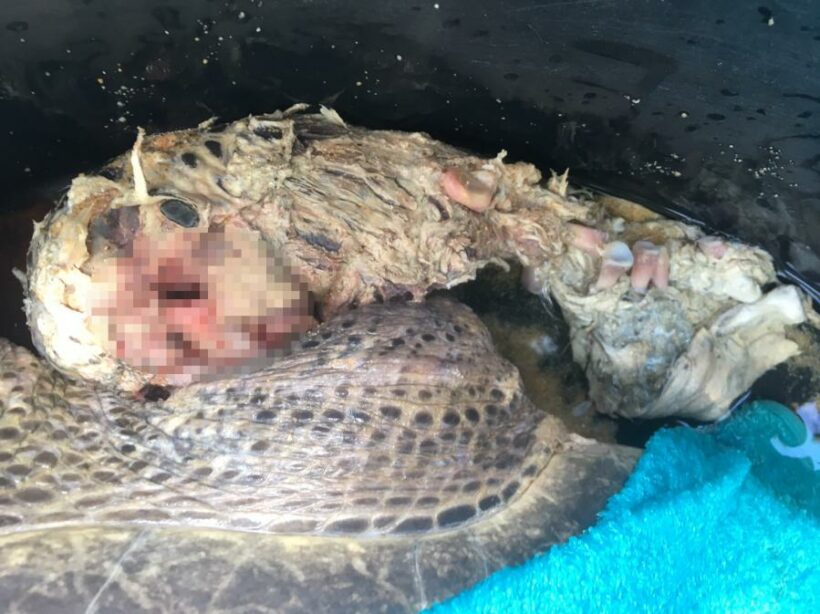 PHUKET: A Thai and Russian tourist received praise for rescuing an injured turtle stuck in a fishing net at Sirinath National Park yesterday.

Officers from the Phuket Marine Biological Center (PMBC) came to examine the creature after receiving reports from the Thai tourist, Chanyut Butrgrim, who was visiting the park at Nai Yang Beach.

“It is an olive ridley sea turtle, 15-20 years old, and weighs about 22kg. She was fatigued and badly injured on her nose, neck and legs. We injected her to avoid infection and performed surgery to cut out part of her infected right leg as the wound was old and already festering,” Dr Kongkiat Kittiwattanawong, head of PMBC’s Endangered Species Unit, told the Phuket Gazette.

Doctors added that she had been stuck in the net for about a week before she floated close to the shore at Sirinath National Park.

Facebook user ‘Ouyyuy Chamaiporn’ shared a video and pictures of the rescue. They were taken while waiting for the PMBC officers to arrive.

“We must admire and acknowledge the efforts of people who perform such good deeds. We are very thankful to Mr Chanyout and the tourist for providing immediate first aid,” the caption read.

Last week, a dead olive ridley sea turtle washed up at Surin Beach (story here). The creature was also injured and had a large quantity of foam and undigested fish in its stomach.

Huge amounts of trash on Phuket beach ‘normal’ at this time of year, Mayor says