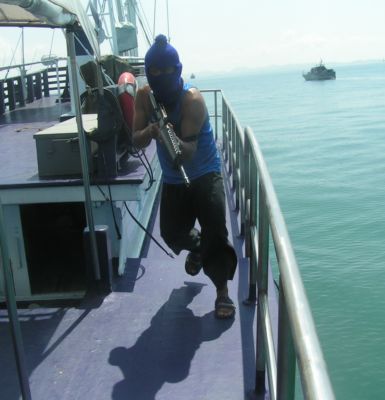 CAPE PANWA: A “VIP” was rescued by officers from the Royal Thai Navy Third Naval Command yesterday as part of an anti-terrorism drill held off Cape Panwa.

About 50 officers from the Navy, Marine Police and Marine Transport Officers took part in the drill, which simulated the rescue of a Thai Government VIP from a terrorist boat in the sea off Cape Panwa. According to the story line, the VIP had been seized by terrorists from a resort on Mai Ton Island.

As the “terrorists” were making their demands, a Navy SEAL team stormed the terrorists’ boat, freeing the hostage.

Rear Admiral Supot Pruksa, Commanding Officer of the Third Naval Area Command, told the Gazette, “We are ready to deal with hostage situations and will always put the safety of the hostage first. Phuket is a world-famous destination, and if VIP guests are threatened, we must be ready to help them.

“We keep a constant watch for terrorism and now there is no cause to be worried. We have many boats patrolling and informing us of any news,” he said.