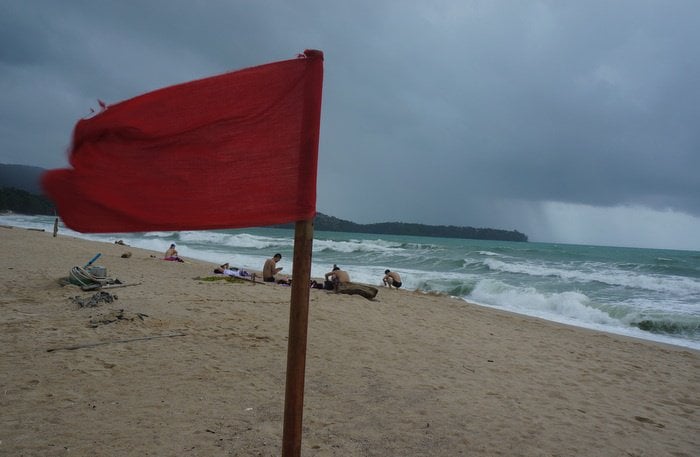 PHUKET: Despite today’s torrential rains, which led to flash flooding in several parts of the island, the Thai Meteorological Department (TMD) has yet to issue any weather warning for Phuket.

“The TMD did report that there would be rain fall all day, which could cause landslides. However, no warnings have been issued,” Santhawat Riwleung, chief of the Department of Disaster Prevention and Mitigation (DDPM) Phuket office, told the Phuket Gazette.

According to a TMD report, Phuket weather will be cloudy with scattered thundershowers. The island will have southwesterly winds ranging from 20 to 35 km/hr and waves reaching about two meters today.

“One pole must be replaced, as it was broken. The others need to be put back upright,” Lt Col Rungrit said. “Phuket Provincial Electricity Authority (PEA) are at the scene. In the meantime, police are helping with the traffic.”

For now, the southbound lane of Thepkrasattri Road next to the temple is closed. The northbound lane has been made into a two-way road from Sapam Temple to the Nissan showroom.

“The work will hopefully be done by today,” Col Rungrit noted.

Phuket Lifeguard Club President Prathaiyut Chuayuanurged urged swimmers to only go in the water at areas with red-yellow flags, and only when lifeguards are on duty.

“Please do not go in the area where red flags are installed, as some part of the beaches are closed to swimmers,” said Mr Prathaiyuth. “Ignoring the red flags may cost you your life.”