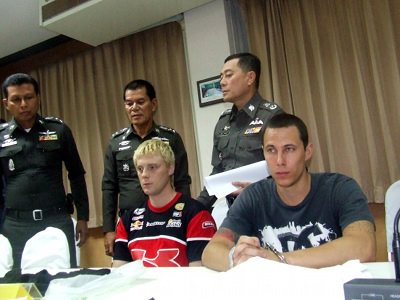 Police said they caught Tommy Viktor Soderlund, 26, and Johan Sebastian Ljung, 25, hiding out at Surin Sweet Hotel on Surin Beach where they had recently rented a room.

The pair confessed that they tracked Mr Schantz down through Facebook because they were angry with him for informing tourist police of a scam they were operating from an internet cafe in Pattaya, according to police.

Soderlund was arrested in connection with that incident, while Ljung managed to avoid getting caught, police said.

The swindling Swedes found out that Mr Schantz had moved to Phuket, and three weeks ago the duo followed and eventually rented a house across from Mr Schantz’s home in The Lantern housing development in Koh Kaew.

In preparation for their attack, the pair packed a knife, a gun and a plastic band for tying their victim’s wrists, police said.

Soderlund and Ljung tried to force Mr Schantz back into his home to carry out their plan, but the victim put up a fight.

The pair then made their escape, eventually climbing a concrete wall, breaking through a wooden fence on top of it and stealing a motorbike from Pissanu Nuithong, who was riding it at the time.

Immediately after the murder, Soderlund and Ljung went to the Anda Place hotel in Thalang where they had already rented a room. They then ditched the motorbike and moved on to the Surin Sweet Hotel.

Among the evidence collected at the hotel were Ljung’s blood-soaked shirt and a knife in the swimming pool behind their room, Phuket Police Commander Pekad Tantipong said.

Police have yet to find the duo’s gun, he added.

Both suspects told police that they did not intend to kill Mr Schantz and that it was an accident, Maj Gen Pekad said.

Maj Gen Pekad said he was impressed that the investigating team managed to apprehend their suspects within 24 hours of the crime.

Maj Nackaphan Photha, an investigations officer with the Tourist Police, confirmed to the Phuket Gazette that the February “call center gang” arrests in Pattaya were based on information provided to police by Mr Schantz.

Mr Schantz used to work with the gang, but later went out on his own, Maj Nackaphan said.

“Tommy was in the group we arrested [in February], but we didn’t catch Johan. We charged them for working without permits, but nothing else because there are no laws against cheating people through phone calls like they did,” Maj Nackaphan said.

The gang has been based in Pattaya for years, selling products via their website, but many “customers” received either low-quality items or nothing at all, he added.

Ljung and Soderlund have been charged with murder, police said.

Sex Drugs: Will Phuket’s tourists be subjected to Night Fire?