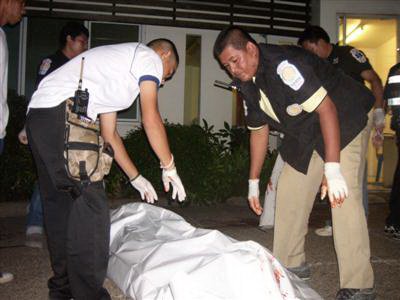 PHUKET: Phuket Police are investigating the stabbing murder of a Swedish man ambushed and stabbed to death as he returned to his luxury villa in Koh Kaew subdistrict last night.

The murder took place in full view of neighbors.

The police identified the deceased as a 25-year-old Swedish national.

The name of the victim is known to the Phuket Gazette, but is being withheld pending notification of next of kin.

Neighbors told rescue workers at the scene that a gang of about 12 Thai men were waiting to ambush the Swede when he returned by motorcycle to his home at The Lantern family pool villa complex off Thepkrasattri Rd at about 8pm last night.

The killer used plastic ties to bind the victim’s hands, then slashed the right side of his neck as he struggled to free himself, neighbors said.

The killers escaped by scaling the wall of the villa complex. One of the gang held up a motorbike driver at gunpoint and used the vehicle to make his escape, witnesses said.

Among the items collected as evidence was a backpack, Apple laptop computer, and a credit card belonging to the deceased.

Phuket in the mood for seafood

5 best wine bars in Bangkok for some quality grapes