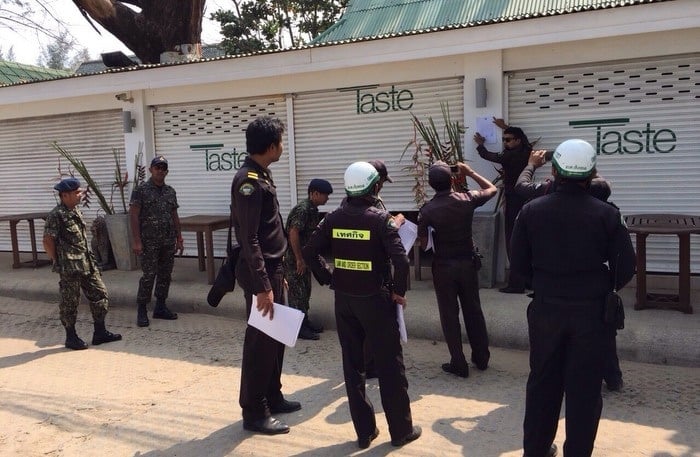 PHUKET: After much controversy and delay, Surin beach clubs are finally expected to be torn down in January*, confirmed Phuket Governor Chamroen Tipayapongtada to the Phuket Gazette yesterday.

“I’m back in Phuket to implement both former and new plans. The beach clubs on Surin Beach are one of them,” said Governor Chamroen.

The governor took a strong but cautious stance on the fate of the beach’s clubs during his first week in office, stating that if it were up to him, he would have them all torn down (story here).

“I believe the demolition will be done soon. Cherng Talay Administration Organization (OrBorTor) President Ma-ann Samran is now working together with local authorities to remove the buildings,” said Gov Chamroen.

“It is not easy to remove government buildings from government land. We must come up with a reasonable plan. Above all, we have to follow the law. We cannot just do whatever we want.”

Mr Ma-ann, who is in charge of managing the area, vowed to tear down all of the buildings to prevent further arguments about land encroachment.

“What I can do is to present a plan to renovate the area by demolishing the old government buildings, which involves all of the buildings currently along the beachfront,” he said.

Mr Ma-ann presented his dream project for Surin’s beachfront last month, including a public park, an activity space and walkway, as well as a stadium (story here).

“I am aware that some people may think this is bad for tourism. The buildings were funded by the government to provide tsunami victims with a place to conduct their business after their previous property was destroyed. However, they are now in the hands of big private business owners,” Mr Ma-ann said.

“I do not have much choice but to take the land back so that no one can make money off of it.”

*The original report stated that the beach clubs would be torn down by the end of the year.