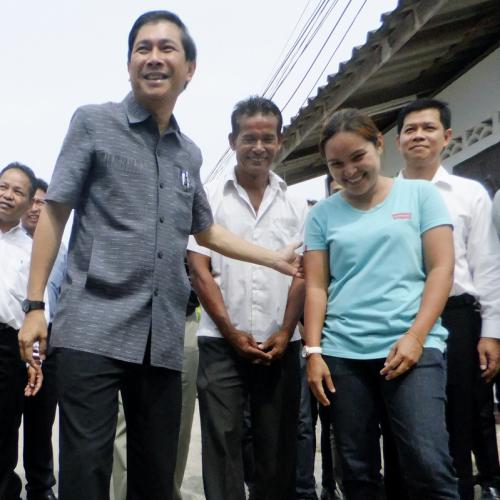 A poor community of less than 500 people who mostly make a living from picking through the trash at Saphan Hin have made a plea to the Phuket Governor for help in expediting their claim to live in a protected mangrove forest on the outskirts of Phuket Town.

Will the villagers finally get a place to call home? The Phuket Gazette‘s Saran Mitrarat reports.

PHUKET: The small village that currently calls itself the “Klong Koh Pee Community” numbers 171 households whose residents once lived on the fringe of the huge landfill behind the Saphan Hin incinerator in Phuket Town.

For health reasons, government officers forced the 463 residents to relocate, and the villagers have since rebuilt their community among the nearby Klong Koh Pee mangroves, which are registered as a protected forest.

However, many of the residents still make their living by picking among the mountains of trash at the landfill in search of items to sell for cash.

Governor Maitri last week led a team of officials to hear the villagers’ top concern firsthand: they have been waiting for years to be issued a “Community Chanote” land document that would guarantee their right to live where they are now, among the mangroves.

“Eighteen communities [in Phuket] have requested a Community Chanote,” Governor Maitri explained to the villagers.

“So far three communities – Klong Koh Pee, as well as the Tah Sak and Ao Yon communities in Pa Khlok – have passed the fourth and final step in the process.”

The cross-over of responsibilities between the government departments involved is the likely culprit for the delay, explained Gov Maitri.

“I have received no updates from the Royal Forestry Department, which is responsible for overseeing protected mangrove forests, related to these applications,” Gov Maitri said.

“Government officials are working too slowly,” he said.

Community leader Seksan Suknuek begged Gov Maitri to throw his weight into pushing forward with the issuance of the deed.

“We applied for a Community Chanote in 2010. Since then, we have seen two governors come and go.

“Please help us to see an end to this during your term. It would be deeply appreciated,” Mr Seksan pleaded.

The Community Chanote scheme, created under the former Democrat government of Abhisit Vejjajiva, is designed to allow communities to live on government land and use it for agriculture, but does not allow the land to be sold.

However, the current Yingluck Shinawatra administration has not moved forward with the plan, reportedly out of fear that it could lead to more encroachment on state land.

The Klong Koh Pee community was one of 35 villages selected nationwide to pilot the project in 2010.

However, to qualify, the communities needed to show that they are capable of managing the land successfully.

A total of 187 communities in Thailand applied for Community Chanote titles, but 17 of the 35 communities selected for the pilot project live on land owned by the Ministry of Natural Resources and Environment (MNRE).

Suwit Khunkitti, the Environment Minister at the time, criticized the scheme, saying he feared that distributing title deeds to communities living on protected forest land could encourage more residents to encroach on forests.

That announcement was followed months later by a Internal Security Operations Command (ISOC) panel being formed to review all claims to plots deemed to be on government land.

Since then, however, little has been heard about the panel or its findings.

On the ISOC panel’s fact-finding team was Phoppol Sirilugsanapong, at that time the head of the Natural Resources Division of the Phuket Natural Resource and Environment Office.

Mr Phoppol identified the lack of consistent policy as one of the main issues hindering enforcement of land rights.

“The [central] government should be clear about forest policy, but the problem we have found is that policy changes with each government,” he said.

For the residents of Klong Koh Pee, the lack of consistency in policy has seen them stand by and watch Prime Minister Yingluck Shinawatra approve a four-lane flyover across the protected swamp only last year, while seeing no progress in securing their own land rights.

Among the chief concerns cited by the ISOC panel was the fear that Community Chanotes would be somehow sold to private investors, a recurring problem with the similar SorPorKor land use documents, which specifically allow people with low incomes to occupy and farm – but not own – state land. “Community Chanote” titles, however, are different from SorPorKor land use documents because they are issued to villagers as communal land that no particular individual owns.

Nonetheless, there are frequent official investigations into allegations of plots on state land being issued full Chanote title status, allowing private investors to develop hotels, restaurants and resorts on the land.

In full recognition of the corrupt state of Phuket’s land title issuing process, the villagers have taken their own steps to inspire confidence among officials that the residents will not sell their land if granted a Community Chanote.

“We understand that people sell land purely to make money, so we have set up a community fund to provide loans at very low interest to villagers who need money,” Mr Seksan explained to Gov Maitri.

“To prevent our land from falling into the hands of private investors, some of the local villagers who can afford it have made voluntary donations into a fund which will provide loans of up to 200,000 baht per household at a rate of one per cent interest per year to people who have no money.

On hearing the villagers’ plight, Governor Maitri pledged that he would investigate the delay in issuing the Community Chanote.

“As I said earlier, government officers are working too slowly on this, so I will push for the application to be expedited,” he said.

Lanterns not cleared for Loy Krathong lift-off in Phuket