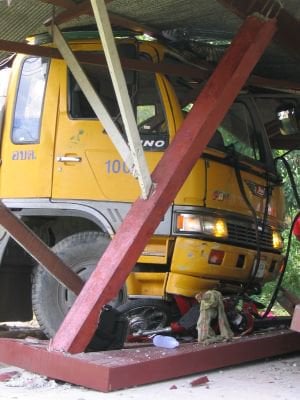 PHUKET: A Songkran crackdown by police and government officials has held Phuket’s Thai New Year holiday road toll to one death and 340 injuries so far. The figures, recorded up to midnight last night, were in line with last year’s, when the number of deaths was restricted to two during the 10-day festival. In contrast, the tally of arrests at some 40 checkpoints around the island was large. In the same period, police stopped 1,160 people arrested for riding or driving without a license and 38 people who were riding motorcycles that had been modified in an unsafe fashion. Another 132 people who were not wearing seat belts and 554 people who were not wearing helmets were stopped, along with 111 people caught driving while under the influence of alcohol. One motorist was booked for speeding Metha Mekarat, Chief of the Phuket Office of Disaster Prevention and Mitigation, told the Gazette that there had been 294 accidents. The single fatality recorded so far was the death of Sarawuth Kohavee, 19, whose motorcycle slammed into the back of a truck in Chalong on the first day of Songkran Week. Phuket’s relatively low accident toll during the holiday was a victory of sorts for the island’s busy authorities – when it comes to annual figures, Phuket still ranks as the most dangerous province in Thailand in which to venture onto the roads. Across the country, 426 deaths and 25,251 injuries have been reported during Songkran so far, with almost 5,000 people arrested for drunk driving.