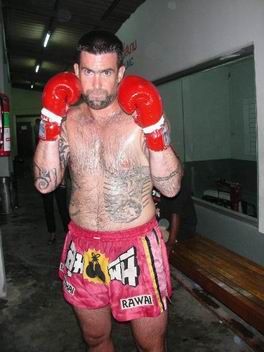 RAWAI: Two men who worked for a “security” company in Iraq died from suspected drug overdoses in Rawai on Monday while on holiday in Phuket.

Australian ex-soldier Jason Gerrard Flynn, 32, from Perth, and James Plunkett Howe, 34, from the UK, were staying in Soi Sammakkee 2 with their Australian friend Mark Leo, who discovered their bodies on Monday morning.

“Both of them were over on a break from Iraq. Many of their friends had died there, which must have been very stressful, although they never spoke about their work much,” Mr Leo told the Gazette yesterday.

At around 3 am, Mr Flynn retired to his room after a heavy drinking session and seemed to be stressed from the night, Mr Leo said.

“Jim went to the room to see Jason and found him unconscious and resuscitated him. I went to see what the problem was. When I saw Jason, I offered to call an ambulance, but Jim said that he knew first aid and could take care of him.

“I then learned they had taken recreational drugs. I was furious. I told Jim that everyone knows my stance on drugs and when he got up I was going to knock him out.

“Everyone who visits me in Phuket gets given the book The Damage Done to read as a warning that messing with any drug in Thailand is asking for trouble,” said Mr Leo.

“But Jim told me that Jason was okay and that he would look after him. The next morning when I woke up and went to their bedroom, I found them both dead,” he added.

“I then called Phuket International Hospital and it seemed like hours before the ambulance arrived. The police arrived shortly after and searched their room. They took evidence away for examination and the bodies were sent to Vachira hospital for autopsies,” he said.

Lt Chianchai Duangsuwan from Chalong Police Station, who had collected the evidence, showed the Gazette a box of steroid vials, six tablets with a horseshoe logo and one of three two-inch zip-lock bags containing a small amount of small translucent crystals.

Five syringes were also found at the scene. Three had been used and one contained a mixture of coagulated blood and air.

“The evidence will be sent to Bangkok for analysis. It seems that Mark had nothing to do with the drugs, and no charges have been made against him,” Lt Chianchai said,

Lt Chianchai today told the Gazette that a special investigation had been launched into Rawai’s drug dealers and that he had already received information that he believes will lead to arrests soon.

A local shopkeeper told the Gazette, “It really is very sad. Although they were great big body builders, they were very friendly and polite.”