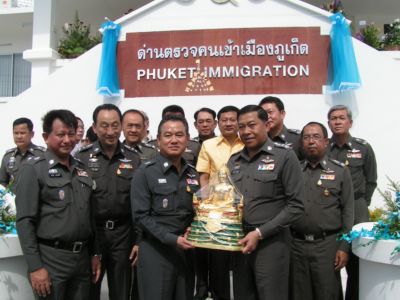 The three-story building, which sits on 341 square meters of land, was built at a cost of just over 12 million baht.

At 9:09 am, the ceremony started with a troupe of girls playing a march followed by a Buddhist ceremony before Gen Wiroj delivered his opening-ceremony speech.

After his speech, Gen Wiroj told the Gazette, “The new building comes not only with new modern technologies, but also a more graceful and professional service.

“The original Phuket border offices were first built 80 years ago and have been upgraded three times. It is time to have a new office and a new image to help meet policy targets set by Commissioner-General Pol Gen Patcharavat Wongsuwan,” he said.

“The Immigration Bureau is analogous to a watch-dog protecting his home,” he added.

Asked whether current measures were sufficient to deal with undesirable foreigners staying in Thailand, Gen Wiroj explained, “We are concerned about terrorists and international crime syndicates as well as other undesirables, and rest-assured with the new systems it should be easier to deal with all of these people to the satisfaction of the public.”