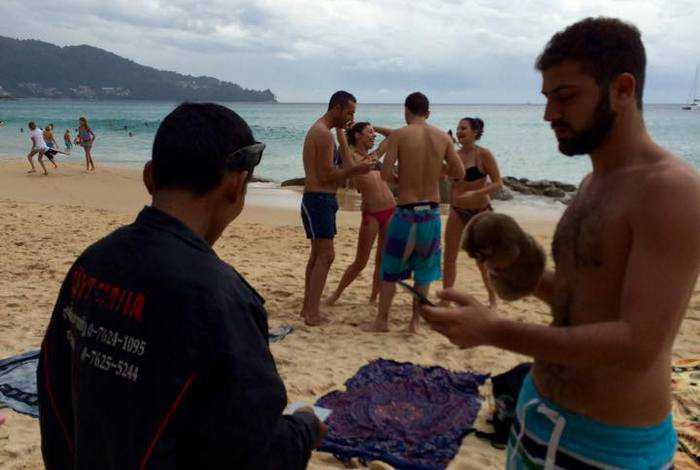 PHUKET: Cherng Talay Police have vowed to search for a pair of beach touts who were taking photographs of tourists with a slow loris at Surin Beach yesterday.

“There were issues with touts offering to take photos of tourists with snakes and iguanas on Surin Beach, but we haven’t had a report about this issue since the beach encroachment crackdown,” Cherng Talay Police Superintendent Paworn Pornpromma told the Phuket Gazette.

“I will send my officers out as soon as possible to investigate.”

The two touts were spotted in the midday sun on the beach with the nocturnal forest creatures by local expats, who confronted them.

“We were sitting at one of the beach clubs and there were all these tourists taking photos, we couldn’t see what it was,” Vicki Kiely told the Gazette. “I went down and talked to one of the tourists and told them they were breaking the law and it’s a protected species.”

The touts threatened Ms Kiely and attempted to prevent her from taking photographs of them while they were working the crowd of tourists.

Police were allegedly then called by the beach club’s staff and the touts made their escape.

“Anyone we find offering to take photos of tourists with animals will be charged for inflicting harm on the animal and causing a public nuisance,” Col Paworn said.

“It’s not fair to torture them for money.”

If a suspect fails to produce the necessary documents allowing them to own a protected species, there will be additional charges, Col Paworn confirmed.

The last permit issued for a slow loris was in 2004.

Records tumble at We Freedive Suunto Series final in Phuket