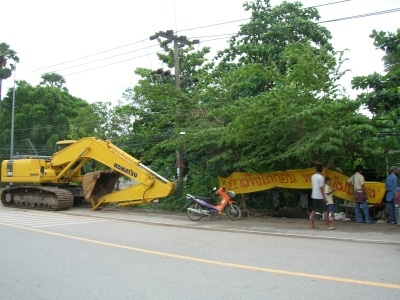 RAWAI: A protest by a group of Sea Gypsies has led to the Rawai road-widening project being halted. The group from Village 2, Rawai, complained about the proposed destruction of four houses to make way for the widening of Wiset Rd. The project has now been put on hold until a solution is found.

On May 19, Seksan Bangjak, a representative of the villagers, filed a complaint with Phuket’s Chief Administrative Officer (Palad) Nivit Aroonrat, calling for assistance in finding new places to live.

The complaint is now being handled by Gen Surin Pikoolthong, Director of the Land Poverty Problem Solving Subcommittee of the National Command Center for Combating Poverty (NCCP). He said that he would find a solution for the villagers as quickly as possible.

The land on which the four houses were built is owned by a former Kamnan (tambon chief) who signed an agreement with the Phuket Provincial Highways Office (PPHO) allowing them to use the land.

Gen Surin, however, explained, “If they can prove that they or their family have been living on the land continuously for an extended period, then they have the right to a fair amount of compensation. They should not just be thrown by the side of the road with 2,000 or 3,000 baht. I will try to find an end to this problem by the middle of June.”

PPHO Chief Thanit Sakiya told the Gazette that he received a call from Gen Surin telling him to halt the project on the area in question until a viable solution can be found for the villagers.

“General Surin didn’t tell me when the case will be finished, but we will continue our project in other areas. In the end we may even have to decrease the road width around the four houses,” he concluded.