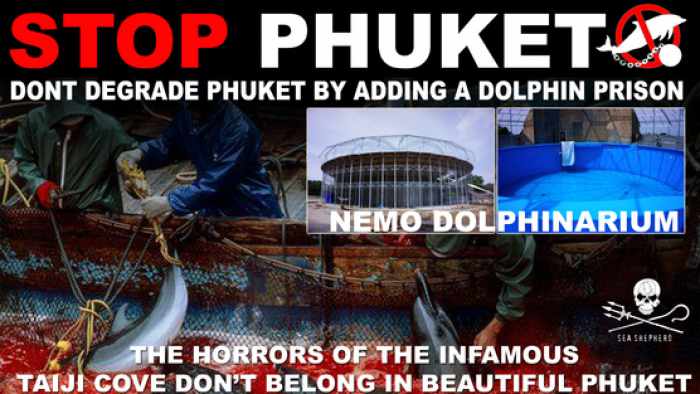 PHUKET: Sea Shepard Global has put out a call to stop the Nemo Dolphinarium from being built in Phuket.

Phuket Aqua Project Co Ltd’s application for the facility has been handed over to the Department of Fisheries’ head office in Bangkok, confirmed Kiattikhun Charoensawan, chief of the Phuket Fisheries Office, to the Phuket Gazette today.

“I don’t see the construction facing any problems. However, there could be some issues with animal rights activists who don’t agree with a dolphinarium being established in Phuket,” Mr Kiattikhun said.

“We just passed the application along; the decision is beyond my authority.”

The facility is about 90 per cent complete, said the project manager, who declined to be named.

“The owner expects it to be open by next high season,” he added.

“Phuket is a world tourist destination. Having the dolphinarium in Phuket will be another option for tourists, and that will bring more tourists to the island.”

Reports show that several of the six dolphins for the facility are being transported from Taiji via the Ukraine, says Sea Shepard Global on their post about the Phuket dolphinarium (see here).

“The copy of the CITES [Convention on International Trade in Endangered Species of Wild Fauna and Flora] document that I received was very low resolution. We have been told that the three females are coming from Ukraine and were wild caught in Japan. Close to 99% of the wild caught in Japan are from Taiji,” says Gary Stokes, Sea Shepherd Conservation Society Director for Asia.

“From the pictures we received from a concerned individual who lives in Phuket, the tank looks to be very small. Not very deep, and no separate holding tanks to separate the animals if needed. That said, no tank can ever replace their natural environment. Dolphins can travel up to 100 miles a day, so ask yourself the same question. Is the tank adequate… I think not.”

Mr Stokes emphasized the group’s stance against wild animals being kept in captivity, whether bred in captivity or caught in the wild.

“The annual slaughter of dolphins in Taiji is what we are aiming to stop, and this is driven by the money from the wild caught dolphins, not the sale of meat. Therefore, any dolphin facility contributes to this slaughter, directly or indirectly. As many nations are closing down parks, others are now opening them up. China, for example, has plans for many across its secondary and tertiary cities; these will all come from Taiji.”

Sea Shepard Global’s petition, which aims to have 5,000 people copy and paste an open letter denouncing the facility, has already raked up 926 copies, according to the website Change.org.

The beginning of the letter reads:

“The beautiful island of Phuket draws holiday visitors from all four corners of the world. They come for the beauty that is Thailand, a country rich in natural biodiversity.

“It saddens me to hear that rather than continuing to strive and develop toward a sustainable and responsible future, Phuket is taking a step backward by allowing a dolphin park (prison) to open on the island.

“The Oscar-winning movie ‘The Cove’ shocked the world as it exposed the dark side of the captive dolphin industry. The film exposes a small group of fishermen in the coastal town of Taiji in Japan.”

The Nemo Dolphinarium isn’t the first attempt to bring a dolphin facility to Phuket.

In 2011, Mark Berman of the US-based Earth Island Institute and Edwin Wiek of the Wildlife Friends Foundation Thailand (WFFT) joined forces to halt plans to build a “dolphinarium” as part of a resort and tourism complex in Rawai (story here).

Dig up the land titles next