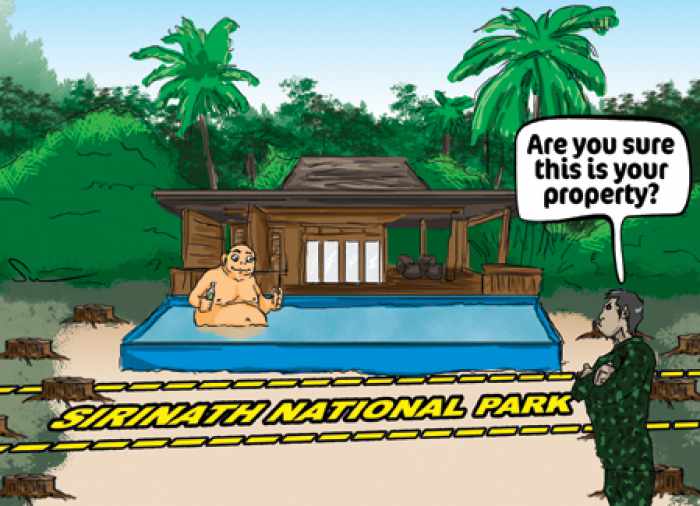 PHUKET: The National Council for Peace and Order (NCPO) deserves the island’s full support for the ongoing efforts to rid public beaches of illegal encroachment in all its myriad forms. The results, which have been nothing less than stunning so far, are sure to go a long way towards restoring the island’s attractiveness to quality tourists, of both the foreign and domestic varieties.

Additionally, the imposition of a semblance of real law enforcement for the first time is bound to drive scores of undesirables, again both Thai and foreign, away from the island – and land not a few where they deserve to be: in Phuket Provincial Prison.

With a beachhead secured, if not yet fully consolidated, the NCPO is now moving inland to take on an even more wily and better armed breed of encroacher: the well-heeled investors who have conspired with corrupt officials to encroach on public park land, both knowingly and unwittingly, by failing to perform due diligence prior to acquiring land.

This is no doubt going to be a far harder task than having a squad of soldiers armed with assault rifles turn up at the high tide mark and order a bevy of beach masseuses to hit the road.

As has been mentioned in this space many times before, corruption involving the issuance and upgrade of land title documents is the ultimate Pandora’s Box. Not only is the problem nationwide in scale, but it dates back generations. Here in Phuket, many of the wealthiest families amassed fortunes during the tin mining days, then parlayed these fortunes into megafortunes by failing to restore the concession land to its “original state”, as required by law.

Instead, they planted some crops, typically coconuts, then laid formal claim that they were using the land for agricultural purposes: the first step in the process through which they ultimately gained outright ownership — just in time for the tourism boom and skyrocketing land prices in coastal areas that were previously thought of as anything but prime property.

It strikes the Gazette as strangely appropriate that the Phuket Land Office itself sits on a parcel of land in the old government quarter that is equidistant from, and just a stone’s throw away from, both Phuket Prison and Phuket Provincial Courthouse. It will be very interesting indeed to follow up on these investigations and see how many government officers end up having to turn in the keys to their Mercedes and BMWs to don the trademark uniform of the Phuket Prison inmate.

Many have compared the NCPO’s beach cleaning effort to the one achieved by the tsunami. The tsunami surge only reached a few hundred meters inland; for the NCPO’s anti-encroachment efforts to penetrate much further may take more power than the NCPO possesses. The national parks, however, are a great and obvious place to start.