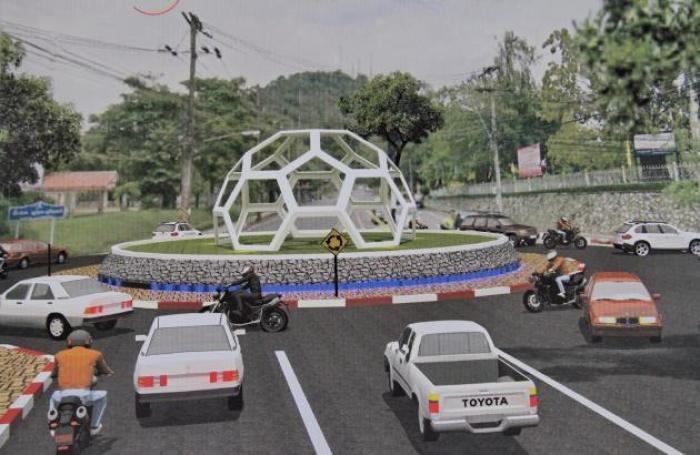 PHUKET: The UK-based non-profit Safer Roads Foundation will fund the construction of a roundabout at the island’s deadly Narisorn-Surin intersection in a bid to reduce accidents.

Phuket had 108 road deaths last year and is in Thailand’s top five provinces for road casualties over the past decade.

The intersection near Phuket Provincial Hall in Muang district has claimed five lives this year, while 36 others have been injured.

After the Safer Roads Foundation offered to help prevent road carnage at a key location in the province, the Phuket Network for Road Accident Prevention came up with the project, said Phuket Provincial Police Commander Teeraphol Thipjaroen.

The 2.8-million-baht roundabout was designed by a Phuket Rotary Club of Tongkah architect and approved by Prince of Songkhla University Professor Pichai Taneerananon. It will be constructed by the Nakhon Phuket Municipality.

The roundabout will provide motorists with enhanced visibility, while its aluminium-composite frame will be durable and will require low maintenance.

‘Octagonal’ suggests the unity involved in the project; the round shape represents Phuket’s nickname, the Andaman Pearl; while the overall look resembles the pattern of a turtle back, signifying longevity.

Phuket’s public and private sectors have initiated a number of measures to try to reduce the number of accidents in the province. The 108 road deaths last year are a marked improvement from previous years, when about 200 deaths per annum were typical.

Measures include the repair of 20 accident-prone road sections from 2008 to 2011 and a serious campaign pushing for people to wear helmets on motorcycles in 2011.

About a third of road accident casualties were linked to drunk driving. Col Teeraphol claimed that police in the provinces didn’t have enough breathalyzers.

The other leading factors associated with road accidents are speeding, reckless driving and accident-prone spots.

Col Teeraphol praised the Safer Roads Foundation, which has been working hard to reduce road accidents in 31 countries.

He said that the foundation had also donated more than 1mn baht for the provincial traffic police division to buy 39 breathalysers in August, resulting in a crackdown on drunk driving (story here).