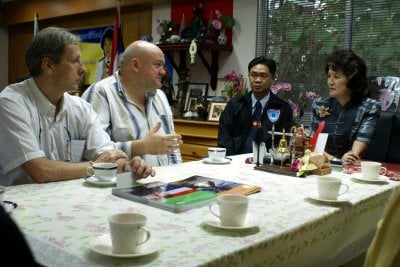 K. Anoma attributed the boost, which nudges China down to fifth place, to the success of the TAT-organized “Leisure 2006” roadshow to Moscow last year.

K. Anchalee led an entourage to Moscow as part of an initiative to promote Thailand as a holiday destination.

Taking advantage of 30-day visa exemptions on arrival, 49,234 Russian citizens flew to Phuket in the first quarter this year, a 40% increase on the year before, added K. Anoma.

Transaero Airlines, the only Russian carrier serving Phuket, has three weekly charter flights from Moscow. The flights are available throughout the high season, from October to March or April.

The Russian government is now planning to appoint an honorary consul in the South, active in Phuket, Phang Nga and Krabi, to support the growing relationship between the two countries and promote cross-cultural exchange.