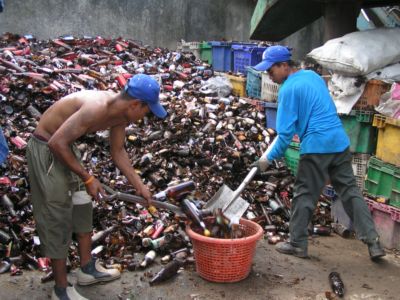 CHERNG TALAY: A joint project by the Cherng Talay Tambon Administration Organization (OrBorTor) and bottle-recycling company Bangkok Glass Co launched in January seems to have hit a snag, a Gazette investigation has found.

Since collection efforts have begun, the estimated 190-240 tons of glass waste that the OrBorTor was anticipating to collect from 7-Eleven shops and other businesses has shrunk to a volume of almost nothing.

When the Gazette checked into the project in March, the OrBorTor was dumping the bottles it had collected on a site beside its office, stating that once sufficient volume had built up, Bangkok Glass would transport it to its recycling facility in Bangkok.

As of Friday, this small pile remained uncollected, and much of the glass in the pile was of quality lower than required for recycling.

After the project was announced in late January, the OrBorTor set out to co-ordinate its collection effort with local hotels, shops, bars and property developments.

K. Ma-an said that they soon discovered that these companies’ lower-paid staff, such as maids, cooks, waitresses and security guards, were already collecting all the used bottles themselves and selling them to local buyers of recyclable materials.

Business owners opted to continue with this informal recycling method as a way for their staff to earn extra income, said K. Ma-an. As a result, no companies signed up to the OrBorTor program in Cherng Talay.

Despite the lower-than-expected volume coming from Cherng Talay, the glass recycling project is continuing throughout Phuket.

In the deal signed with all 16 of Phuket’s subdistricts, Bangkok Glass was offering to pay 70 satang per kilogram for the glass, and proceeds from the waste were intended to fund the development of schools on the island.

Currently, Bangkok Glass is transporting 50 tons a month on average from Phuket to its recycling center in Bangkok, using broker Kaew Na Ka to coordinate with the local authorities, said the company’s PR manager Pantida Wittayaparlert.

According to OrBorTor figures, Cherng Talay generates 950 tons of trash a month, with glass accounting for 20-25% of the weight. The fast-growing subdistrict’s garbage volume has nearly tripled over the past five years.

Chalerm retreats from angry mobs in Phuket and Krabi