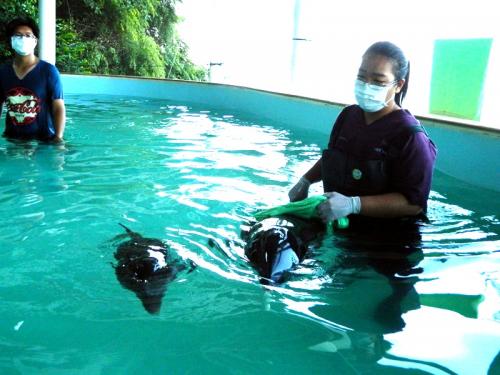 PHUKET: Serious internal infections have left a mother striped dolphin and her baby in critical condition, despite the pair being rescued on January 4 in Phang Nga and receiving round the clock care at the Phuket Marine Biological Center (PMBC).

“The mother dolphin has been unable to swim since she was first rescued. She had wounds on her skin and in her mouth; blood in her stool; and no food in her stomach, which means she had not eaten for days,” said Dr Kongkiat Kittiwattanawong, who heads the PMBC’s Endangered Species Unit.

The mother is about 20 to 25 years old and weighs only 70 kilograms, about half the weight of an average adult female striped dolphin.

The baby dolphin is about 1 year old and weights 16kg. It also had wounds in the mouth and was unable to eat much, but it could still swim.

The pair is kept together during the day to reduce stress, but separated at night to reduce virus adsorption.