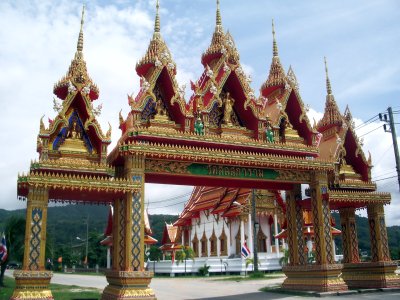 PHUKET: One of the island’s most famous temples is threatening to file a police complaint after a remote-controlled aircraft crashed into the roof of the nuns’ dining hall on Wednesday night.

News of the damage at Wat Luang Pu Supha in Chalong Village 6 was reported to the media yesterday at 12:30pm by Mr Piyawat Leehaweerachart, a 45-year-old layman who serves as the temple’s financial affairs coordinator.

According to Mr Piyawat, the triangular-shaped aircraft slammed into the roof of the nuns’ dining hall, dislodging three ceramic tiles.

Mr Piyawat said it was not the first time a remote-controlled aircraft had crashed on temple grounds.

A group of remote controlled aircraft enthusiasts have long used the area to fly their aircraft, he said.

Mr Piyawat told police he had warned the club members many times, but to no avail.

The fact that no-one had come forward to accept responsibility for the latest crash, or one that preceded it six months ago, prompted him to contact police, he said.

For comment on the complaint, the Gazette contacted Korn Chamreonwong, head of the Chalong Remote Control Airplane Club.

Mr Korn, who also operates a remote-control airplane parts shop on Soi Yodsane in Chalong, admitted it was his own aircraft that caused the damage on Wednesday night.

He said he went to the temple with Burmese workmen the following morning to fix the damage, but the workers said they needed an extra-high ladder that they could only get in Thalang.

Mr Korn said he went back to his shop to wait for them.

By the time the work team returned with the ladder, Mr Piyawat, accompanied by police and media, had already come and gone, he explained.

Mr Korn said he has already paid for the completed repair work and donated 1,000 baht to the temple to ask for forgiveness.

There have been three accidents over the past two years, he admitted.

The most serious was the crash of a remote-controlled plane into the roof of the main prayer hall six months ago.

The member responsible, identified only as “Toto”, refused to accept responsibility for the mishap, he said.

To pay for the damage from that accident Mr Korn said he set up a collection box in the area where the members meet, near the site where the new Klong Krata Reservoir Dam will be built. He had urged the members to chip in a small amount every time they met to pay for past damages, he said.

Chalong Police Deputy Inspector Pol Capt Chotipong Kessarin said that as soon as the temple directors file an official police complaint they will send letters to the Chalong Remote Control Airplane Club and the temple management, asking both sides to meet at Chalong Police Station.

Reputedly the world’s oldest living man he is about to celebrate his 114th birthday on September 4, and his devotees are preparing a grand celebration to mark the occasion.

The Gazette notes that the club’s activities in the area predate construction of the temple.