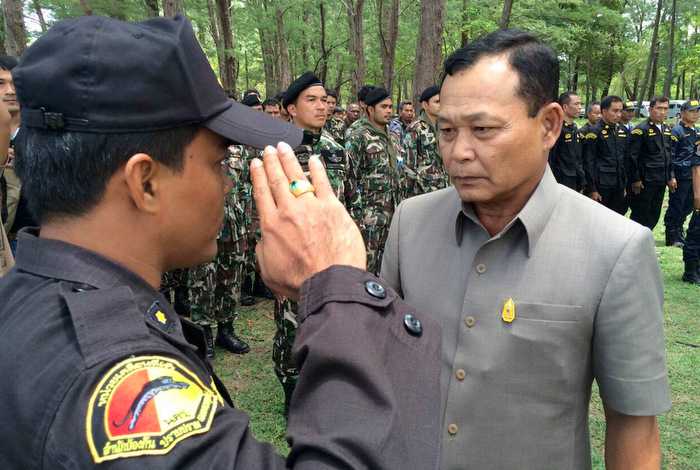 “I gave him my word that more military personnel will be assigned to protect him and his officers,” Gen Dapong said. “They will also have better self-protection equipment and any other equipment they need.

“Mr Kitiphat is doing a good job. He has reclaimed several plots of land in Sirinath National Park. We will support his efforts by providing more funds so he can continue his work.”

“I feel much better after talking with Gen Dapong. He has pledged to give us his full support, which has given me the confidence to continue my work,” he said.

Mr Kitiphat tendered his resignation last Thursday, after only three months as park chief, amid death threats and reports of intimidation by influential people (story here).

In August, military bodyguards were called in after Mr Kitiphat’s assistant was told over the phone that “five M16s are ready to get him [Mr Kitiphat] over beach restaurants” (story here).

“The death threats have stopped, or at least we have not had any lately, so I will keep moving forward to take back our national treasure,” a re-invigorated Mr Kitiphat said on Saturday.

“The National Council for Peace and Order [NCPO] will support us and provide everything we need,” Gen Dapong said.

He also called on any officers from the Department of National Parks (DNP) and the Royal Forest Department (RFD) to report any threats received directly to him.

“Wrongdoers must be punished, in accordance with the order issued by the prime minister,” Gen Dapong said.

However, Gen Dapong also called on the public to understand that not all conflicts of information between departments were evidence of illegal activities by corrupt officials, pointing out that the DNP and the Land Department had recorded many different details about the same plots of land.

“People ask if corrupt former officers allowed the forest to be encroached. This, I cannot argue,” he said. “However, we cannot accuse all former officers of being corrupt. Lack of proper equipment to survey plots has been one of the many long-standing problems.”

Gen Dapong urged current “owners” and people considering buying land along the boundary of Sirinath National Park to verify with officials that the plots in question are not on protected land.

Located at the Sirinath National Park head office at Nai Yang, the land verification center is open from 8:30am to 4:30pm, Monday to Friday (story here).

The center was established on July 8 on the order of DNP Chief Samak Donnapee (story here).