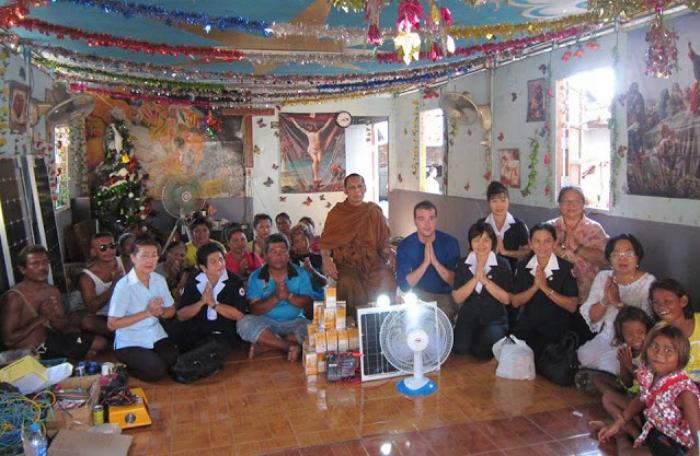 PHUKET: The 25-household Rawai sea gypsy community is overjoyed to finally have electricity, after having lived without it for most of their lives, as a land-rights conflict hampered their access to the power grid.

The free installation of a 3,000-watt solar cell-powered system to generate electricity in the area is the result of an initiative by Phra Khru Wimonpanyakhun, the ‘Solar monk’ based in Ubon Ratchathani, who is also the founder of the solar-cell-powered Sri Saengdham School.

Some residents shed tears upon seeing the lights.

“A woman who is about 80 years old told me that she was very happy to finally see light in her house. She said she had lived for 80 years of dark nights,” said Nirund Yangpan, one of the community leaders.

“People in our village either have their own transformers or connect with ones who have electricity. We have to pay about 1,500-1,800 baht per household every month, which only provides enough power to run a television, a rice cooker, a fan and three lightbulbs.”

Mr Nirund said that he hoped more houses in the area would get solar cell-powered systems installed soon.

Phra Khru Wimonpanyakhun said he was delighted to to help the community. He also outlined a sustainability policy called the ‘Three baht fee for an endless supply of electricity via solar cells for off-grid areas’.

He urged each family to pay the daily fee of three baht to help ‘save up’ for the system.

“Saving it [three baht a day] for three years, the community will get 82,125 baht to buy nine 120-amp deep-cycle batteries. It costs 40,500 baht to maintain the solar power system. You also still have 41,625 baht in savings, which could be seed money to purchase a new set of solar cells when the 25-year lifetime has expired,” Phra Khru Wimonpanyakhun explained.

The move could be applied to any rural area unable to access the power grid, he said.

“Thailand has strong sunlight, so you can install solar cells for electricity just about anywhere,” said Phra Khru Wimonpanyakhun.

He said installation of the solar-cell system for the Rawai sea gypsies was funded by a 180,000 baht donation from people nationwide, while 25 fans were provided to the community by the Phuket Red Cross Society.

The initiative was led by Vassana Tipayapongtada, wife of Phuket Governor Chamroen Tipayapongtada and president of the Phuket Red Cross.