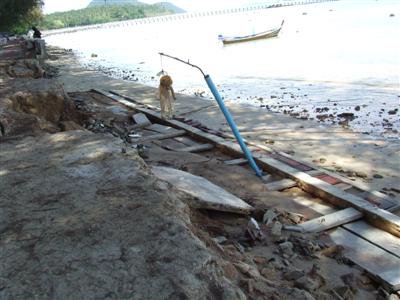 RAWAI BEACH, PHUKET: Rawai Municipality will set up a panel to investigate extensive damage to a seawall that was built in 2004.

Rawai Mayor Aroon Solos said he did not know what caused a section of the wall over 30 meters long to collapse, exposing sharp pieces of rebar and leaving broken lengths of PVC pipe suspended in the air.

The wall was built to stop erosion and protect the beach road and decades-old pine trees along the beachfront.

A private contractor was hired in 2004 to design and construct the 200-meter-long seawall on the road to the municipal offices.

The municipality’s public works division has been instructed to inspect the damage and has cordoned off the area to protect public safety, putting up signs warning of the danger.

“In my initial talks with the public works department, I was assured that everything was built according to plan with the specified materials and that the work was certified by engineers.

“Whatever the case, we’ll probably have to invite the contractors and engineers in to review the construction in detail and set up a panel to determine what caused the damage.

“If the panel concludes the damage is the result of poor construction work, the contractor will have to accept responsibility for making repairs, because it is still covered by guarantees under the contract. If the collapse is determined to be from natural causes we’ll have to reconsider how we are going to deal with the problem,” Mr Aroon said.