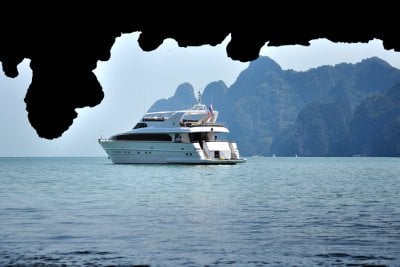 PHUKET: The chief of the Phuket office of the Marine Department says he is drawing up plans to launch a campaign targeting “hundreds” of visiting foreign yachts that avoid paying tax to Thai officials despite conducting “business” in Thai territorial waters.

Named among the visiting yachts to be targeted were charter tour boats for tourist activities, such as snorkeling, diving and sea tours.

Of the hundreds of foreign charter yachts that enter Thai waters each year, some high-end businesses charter one yacht at a cost of 100,000 to 300,000 baht a day, he said.

“They make huge amounts of money from this business. By law, they must pay trading tax* [on income earned in Thai waters] to the government, but we get nothing.

“Thailand gets nothing more than their trash and they keep all the money back in their own countries,” he said.

The Cabinet last year approved a budget of 15.1 million baht to tackle the problem.

“One radar station* is likely to be located at Chalong Pier and the other two places have yet to be decided, but the aim is to cover the whole island region [around Phuket],” explained Mr Phuripat.

Currently, the only way the Marine Department knows of vessels arriving in the area is if a random patrol encounters them on the high seas or if the captain presents himself and his vessel to the authorities to declare that he has arrived in Thailand, he added.

“I’d really like to come up with a long-term solution to this problem because we don’t want it to continue. Every organization [government and private] is affected by this, so we will need an integrated effort if we want the project to succeed,” Mr Phuripat said.

Once the details have been finalized, the plan will be presented to Cabinet for approval, he added.

However, Mr Phuripat stressed that the crackdown will not affect Thai-registered vessels.

* The original report stated that the trading tax to be paid was 20 per cent. Since the story was posted, Phuket Marine Office Chief Phuripat clarified that the percentage of tax to be paid varied depending on the business paying tax and the income earned by that business. He also clarifed that only one radar station is to be installed in Chalong, not three.