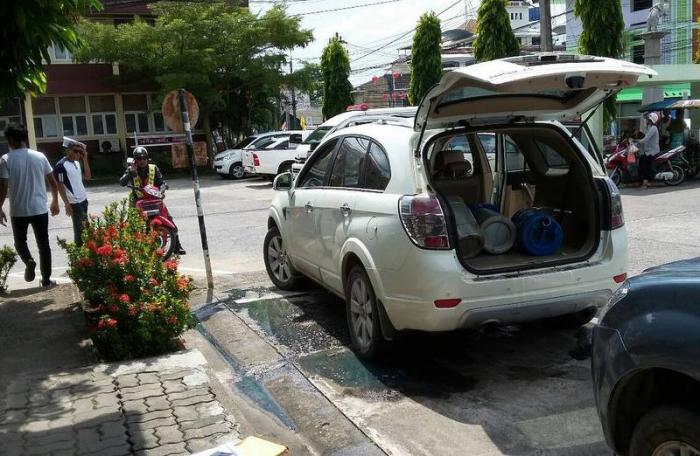 KRABI: Police in Krabi had to hold back an angry woman intent on burning down the local police station yesterday after she pulled up outside the building in a car crammed with containers of gasoline and threatened to torch the place.

Sanejan Jankert, 39, arrived at the station armed with two lighters and about 100 liters of gasoline in five 20-liter containers in the back of her car. She was intent on going out in a blaze of glory as a form of protest against slow action by officers following a complaint she had made about a neighbor causing damage to her land.

“Ms Sanejan came to the police station to demand an update on the complaint that she had filed a long time ago. She brought the gasoline with her in case she was not satisfied with the explanation,” said Boontawee Toraksa, Krabi Provincial Police deputy commander .

“Clearly she was not happy with the progress of her case so she left the station, poured some of the gasoline over her car and then attempted to douse the police station in petrol as well.”

“She attempted self-immolation in January by pouring petrol over herself, but the police were able to stop her before she could light herself on fire,” he said.

“Ms Sanejan was hoping we would immediately arrest the person she has lodged the complaint against, but we have to be thorough in our investigation. However, we will try our best to take action in the case.”

The police charged Mr Sanejan with attempted arson of a government office.

Meanwhile, police in Phuket continue to arrest locals suspected of participating in a riot in Thalang in October last year, during which the rioters smashed windows, threw firebombs into the Thalang Police Station and torched several cars parked at the facility on Thepkrasattri Road.

The riot broke out after two men suspected of dealing drugs were killed in a police chase (story here).