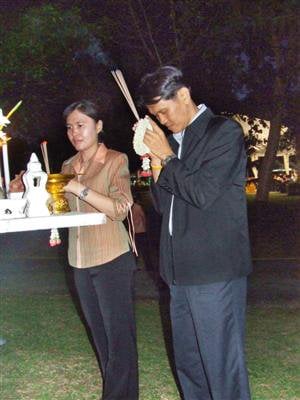 Gov Preecha, who comes to Phuket after serving as governor of his home province of Phichit, paid his respects to the statue of King Chulalongkorn (Rama V) in front of Provincial Hall, then accepted flower baskets from many top officials and department heads.

Governor Preecha, 55, was greeted by departing governor Niran Kalayanamit, who will now take up the post of Deputy Director-General at the Interior Ministry’s Department of Provincial Administration in his native Bangkok after six years in Phuket.

The new governor told members of the local press that he would do his best to develop Phuket’s economy in a sustainable way, with emphasis on high-end eco-friendly tourism.

Before his arrival, Gov Ruangjan told the Gazette he was happy with his posting in Phuket and looked forward to meeting with and serving the needs of the island’s large expatriate community.