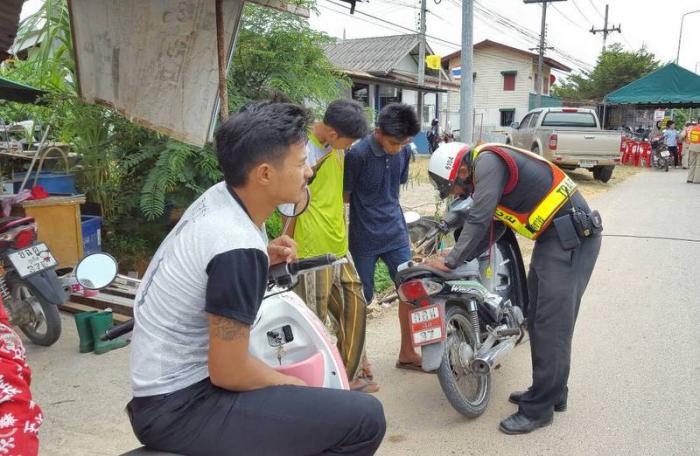 PHUKET: More than 100 drunk drivers in Phuket have had their vehicles confiscated by police in the first three days of the Songkran ‘Seven Days of Danger’ road-safety campaign.

Impounding vehicles driven by drunk drivers is part of the National Council for Peace and Order’s ‘No Drink Driving’ campaign during the Songkran holiday. It requires that officers hold vehicles seized from drunk drivers until the end of the campaign on April 17.

Six of the drivers who had their vehicles confiscated were foreigners, who, in addition to driving under the influence, were not wearing helmets, confirmed an officer from the Department of Disaster Prevention and Mitigation (DDPM) Phuket Office.

Updated Phuket statistics issued by the DDPM for traffic offences during the first three days of the campaign are as follows:

Although there have been no fatalities on Phuket’s roads since the safety campaign began on Monday, the DDPM has recorded 28 accidents and 34 injuries in the province.

“I am very pleased that the death toll on the roads remains at zero after three days,” said Sirisak Skoonsorutcha, chief of the DDPM Phuket Office. “Making it past April 13 with no deaths is very encouraging. We hope that his year we will meet our goal of zero road-deaths during the campaign.”

Other provinces, however, have not been so fortunate.

By the second day of the safety campaign, the number of road fatalities nationwide stood at 116, which is a 97-per-cent increase from the same period last year, the Road Safety Directing Center announced yesterday.

So far, there have been 907 road accidents nationwide, which injured 981 people, higher than last Songkran’s total of 723 accidents and 765 injuries.

Drunk driving and speeding were the two biggest factors leading to the road carnage, at about 33 and 35 per cent respectively, while 80 per cent of the accidents involved motorcycles, said Dr Sopon Mekthon, permanent secretary of the Public Health Ministry.

Chiang Mai also has the highest number of accidents at 45 cases, followed by Udon Thani at 34 and Nakhon Si Thammarat with 32. So far, Samut Prakan is the only province that has not reported a road accident, while 23 provinces, including Phuket, have not reported any deaths from road accidents.

On Tuesday alone, there were 520 road accidents nationwide, killing 64 people and wounding 550 others, Dr Sopon said. Officials at 2,125 checkpoints arrested 104,484 law violators – most of whom were nabbed for not wearing a helmet or failing to present a driver’s licence.

As to whether the center would adjust its plans considering that the death rate has almost doubled, Dr Sopon insisted that the authority’s plans were perfectly fine.

DDPM Chief Chatchai Phromlert said that April 13 usually saw the highest number of deaths through road accidents every year. Since more than half of such deaths involved locals, he said the center has instructed provincial authorities to have local administrators warn motorists to be more careful and refrain from traffic-law violations.

Meanwhile, Col Narat Sawetanant, director-general of the Probation Department, yesterday said that his agency was coordinating with hospitals to have drunk drivers arrested during Songkran provide public service at hospitals and morgues. He said the court would order drunk-driving offenders to perform at least 48 hours of public service in these facilities.

He added that such public work would help the offenders become aware of the consequences their actions can have and also reduce drunk-driving-related accidents by 10-20 per cent.

As for the agency’s moves to apply ‘social measures’ to punish probation-breaching individuals, Mr Narat said that his department was officially cooperating with two agencies on the initiative.

From December to February, the Land Transport Department, which screens driving licence applicants, found that 570 of the applicants were term-breaching parolees. The National Office of Buddhism found 108 parolees trying to be ordained as monks.

“One Last Party’ before iconic Phuket beach clubs get demolished