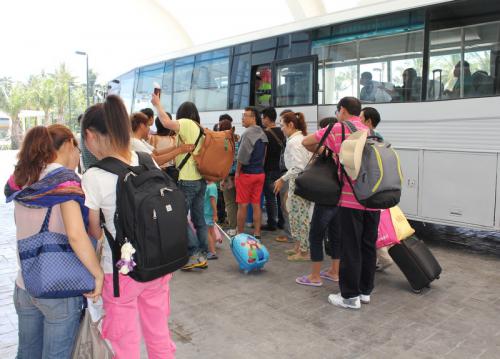 “The check-in system for the flight went well. Passengers checked in at the X-Terminal, then took the shuttle to the main terminal to clear Immigration and Customs,” Director of Phuket International Airport Pratuang Sornkham told the Phuket Gazette.

“We believe the X-Terminal will do well. We just need to make sure the check-in system is working properly before it becomes fully operational.”

The building was constructed to relieve overcrowding in the main terminal, and initially will service charter passengers from Phuket’s two largest source markets, Russia and China.

Mr Pratuang told the Gazette last week that the trial period will continue for two weeks, and that by the end of the month, all departing international charter flights will be using the X-Terminal to check in (story here).

Two clipped in Phuket beauty salon with over 90kg of marijuana