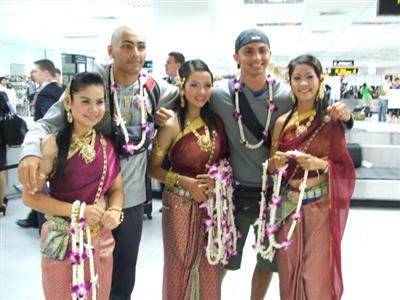 MAI KHAO: The first charter flight from Tallinn in the Republic of Estonia to Phuket touched down at Phuket International Airport on December 19.

At 8 pm, a group of 220 Finnish and Estonian tourists arrived in Phuket aboard a Boeing 757-200 operated by Air Finland.

The tourists were welcomed by members of the local press, Phuket International Airport Deputy Director Yutthana Jitrob-aree and staff from Tourism Authority of Thailand Southern Region 4 Office, including its director Suwalai Pinpradub.

Air Finland will operate six Tallinn-Phuket flights a week as part of an initiative to promote Phuket and the Andaman region as a holiday destination for Finnic people in the Baltic Sea region.