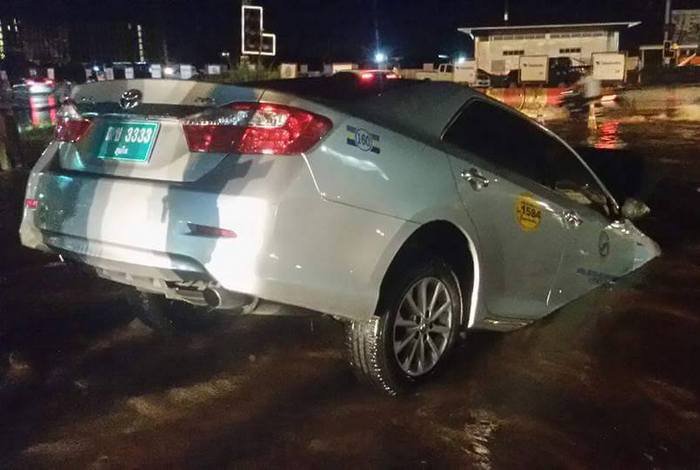 PHUKET: A Phuket International Airport taxi driver took his car for a swim after ignoring warning signs and plunging his vehicle into a large hole at the Samkong Underpass construction site on Saturday night.

“Cars are only allowed to make left-hand turns onto the bypass road as they approach from Kathu. Despite the lights, signs and traffic control personnel, the driver drove into the oncoming lane and continued to go straight until the car fell into the hole,” said Chalermpon Wongkiettikun, the construction site manager.

“It was raining hard at the time and there was already flooding at the site, so maybe he just didn’t see the warnings. However, I assure you there were workers on-site to direct drivers.”

The construction company building the island’s second underpass has been under fire recently for the road dangers presented by the site, which saw a Phuket lawyer flip his more than 3-million-baht BMW Z4 earlier this year (story here).

Late last month, Samak Luedwonghad, director of the Phuket Highways Office, demanded that the company repair dangerously rough sections of the road surface (story here). However, well cordoned off sections, such as the hole that the taxi crashed into, were not anticipated to be road hazards.

The driver, who was not named by Mr Chalermpon, was only minorly injured.

“He quickly called his insurance company and had the car removed from the site,” Mr Chalermpon said.

“Drivers must follow basic rules to ensure their safety and the safety of others on the road. Firstly, they must obey road laws; secondly, they must pay attention to signs and workers guiding traffic flow; thirdly, they must slow down when it is raining or when they are approaching a construction site.

Lt Col Rungrit Rattanapagdee of the Phuket City Traffic Police confirmed that his men were informed of the incident, but had not been dispatched.

“With the heavy rain, we had our hands full. After learning that there was no damage to public property and there were no major injuries, we decided not to pursue a case against the driver,” Col Rungrit said.