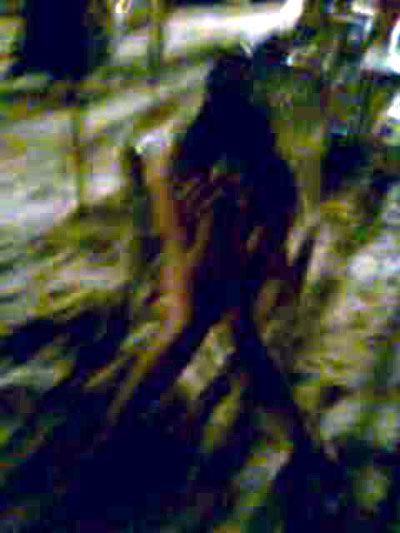 PHUKET: A Phuket motorcycle taxi driver who entered the charred remains of the Tiger Discotheque the day after the fatal fire claims that photographs he took inside bear images of the spirit of a woman who lost her life there.

The motorcycle driver told the Phuket Gazette that he belonged to a group of motorcycle taxi drivers who pick up fares from in front of Ocean Mall on Bangla Road in Patong, a short walk from the ill-fated disco.

“On August 18, I talked to two or three friends who also operate motorcycle taxis at the same spot. We were curious to see how the inside of the building looked after the fire,” he said.

He said he happened to know the security guard on duty at the time, who allowed him entry.

“So I went to the building around 1:30pm and stood at the entrance to the disco section. I used the camera on my mobile phone to take some pictures to show my friends,” he said.

“I took a lot of photos while we were inside. I didn’t choose any specific subjects. I am not a professional photographer. All I did was point and shoot. Then we all left quickly,” he said.

“After we got back to our spot in front of Ocean Shopping Mall to wait for passengers, I started to review the photos I took earlier inside the pub. I was quite shocked to see two inexplicable images,” he said.

“In those pictures, it appears as if there is a woman sitting on a chair in front of the camera. I swear that there was no one else around when we were inside; all of us were male,” he said.

“I believe the images of what I captured is the spirit of Ms Nipaphat Sudtasorn, who worked at the Tiger Discotheque. We all went to make a merit at the temple for Miss Nipaphat already,” he said.

“The reason I believe this image might be the spirit of Miss Nipaphat is because I saw her mother come to the site with a monk to perform a special ritual inviting Nipaphat’s spirit back home. Her mother said Nipaphat appeared to her in her dream asking for help. She said her daughter cried, saying she could not escape from the discotheque,” he said.

The Gazette contacted the Patong Police to see if they were aware that some people had been trespassing in the area, which after the blaze was declared a fire disaster zone with entry restricted to unauthorized personnel.

Lt Col Jongserm Preecha said, “I wasn’t aware that there were people sneaking inside the Tiger Disco building. Even though we sealed off the area well, it is still possible that people could sneak in. Everyone should know automatically that a crime scene is off-limits. We won’t [go after] people who have already been inside, but we would like to reiterate that no one should ever enter a crime scene.”

Phuket Sport: International round up