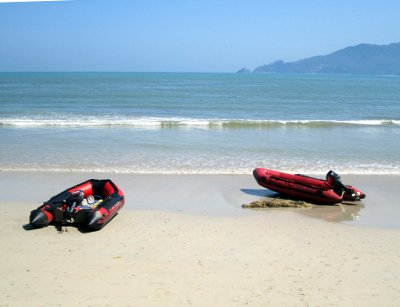 PHUKET: Marine Police this afternoon called off a search-and-rescue mission for US university student Joshua Shane, who is missing and presumed drowned after entering the surf with friends at Patong Beach last night.

Pol Lt Jeerayuth Onthong told the Gazette that the search-and-rescue mission for the 21-year-old was called off at 1pm today.

Lt Col Rittee Paopan of the Marine Police office in Phuket Town said the rescue mission was cancelled based on eyewitness accounts of his disappearance, the length of time missing and because of weather and surf conditions.

The team will resume their work tomorrow.

“The next mission will be a search for his body, not a rescue mission,” he said.

According to a report in the AZCentral.com news website, the student’s parents have already been notified by US diplomatic staff that their son is missing, presumed drowned.

The report quotes Arizona State University (ASU) spokeswoman Julie Newberg as saying that Mr Shane was among twenty students from ASU who flew to Thailand to study under an “Urban Sustainability and Planning in Thailand” project.

The trip began on May 25 and is scheduled to end June 19. The itinerary included stops on the Gulf Coast, Bangkok, Chiang Mai and Phuket.

Scores of foreign tourists die off Phuket beaches annually during the monsoon season, which typically runs from May to November. Many ignore red warning flags and enter the surf, only to get pulled offshore by treacherous rip currents.

To vote in the current poll on the best way to minimize the death toll along the island’s beaches click here.