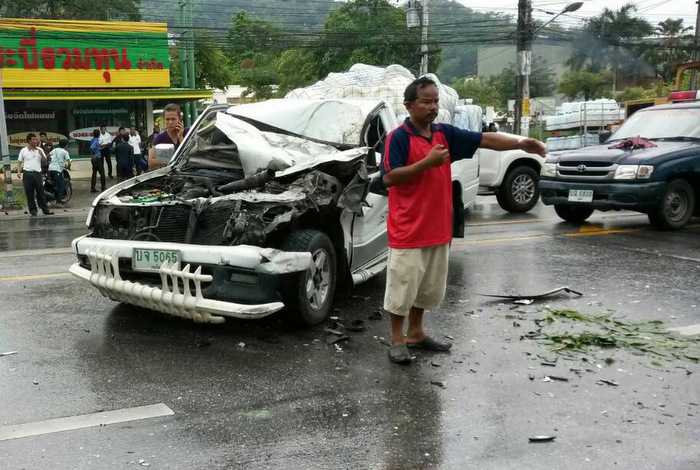 PHUKET: Phuket will remember victims of road traffic accidents on the island for the first time on November 25, as part of World Day of Remembrance for Road Traffic Victims, the Department of Disaster Prevention and Mitigation (DDPM) Phuket office confirmed today.

The event, which was adopted by the United Nations General Assembly in 2005, is observed around the world on the third Sunday of November – this year on November 16 (tomorrow).

“While Bangkok will hold World Day of Remembrance for Road Traffic Victims tomorrow on November 16, other provinces have been allowed by the Road Safety Directing Center [click here] to choose any date before the end of the month,” Santhawat Riwleung, chief of the DDPM Phuket office, told the Phuket Gazette this morning.

“November 25 will be the first time that we have ever observed this special day in Phuket,” he added.

The DDPM will also organize a road safety seminar on the day for students of Phuket Polytechnic College.

“The seminar for the students will be on November 25 to help raise awareness of road safety, therefore reducing the number of traffic accidents on our roads every year,” said Mr Santhawat.

Poor awareness of safety issues was a main cause of traffic accidents among young people, he added.

“Students are our main target because teenagers do not really follow road safety regulations properly. We need to train them and open their minds to the importance of road safety,” said Mr Santhawat.

The Road Safety Directing Center’s official website only records the number of accidents in Phuket each month – not the number of deaths. It was last updated in June.

“Phuket Provincial Police send statistics of roads accidents to the Road Safety Directing Center in Bangkok every month, but we cannot control what the center does with the information after that, said Mr Santhawat when asked why the website had not been updated since June.

He added that the reason for moving the remembrance day to November 25 was because of the Asian Beach Games.

“We just do not have the manpower right now to be able to mark the road traffic remembrance day on November 16, as the majority of police officers are on duty ensuring public safety during the Asian Beach Games,” he said.

“But even though we are not holding this global event on its correct day, I would like to urge motorists to respect traffic laws as they have been put in place to keep you safe,” he added.

To mark World Day of Remembrance for Road Traffic Victims, the British Embassy in Bangkok has also issued a plea for all travelers in Thailand to observe road safety traffic regulations in a bid to eliminate the deaths and casualties.

In its statement (click here), the embassy pointed out that: “Thailand ranked number two of road fatalities in the world, with 44 road deaths per 100,000 people. Fatalities from road accidents made up 5.1 percent of Thailand’s overall deaths.”

“People would not ride a motorcycle in the UK without a helmet and proper clothing, yet many do so when on holiday in Thailand,” said British Ambassador Mark Kent.