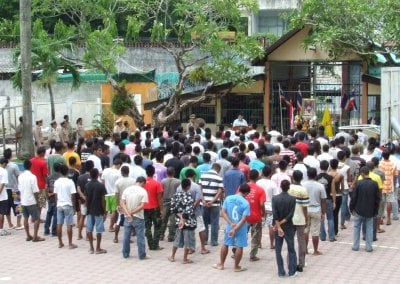 PHUKET: As part of a Royal Pardon, 148 convicts were released into civil society from Phuket Provincial Prison yesterday.

Phuket’s newest batch of ex-convicts, 138 men and 10 women, were among 490 Phuket prisoners who were either released or had sentences reduced to to mark May 5 Coronation Day in Thailand.

Vice Governor Smith Palawatvichai told the ex-cons at the release ceremony, “It’s very kind of HM The King to give you new lives, so don’t come back again.”

About 60% of those released were incarcerated for drug-related charges, mostly for possession or sale of ya bah (methamphetamine or, literally, ‘crazy drug’).

V/Gov Smith said the drug only cost five to ten baht per pill to produce in areas along Thai borders, but was currently being sold on the streets of Phuket for 500 to 800 baht.

He warned the ex-cons of the dangers of getting involved in the drug trade again, saying sentences for drug convictions are now stiffer than in the past.

Before their release, the freed felons took part in a group oath pledging loyalty to Nation, Religion and King, swearing to abide by the laws of the land.

“I’m really happy to get out and I will not be coming back again,” said one of the ex-cons.

The pardons should take some pressure off Phuket Provincial Prison, which remains badly overcrowded despite today’s release.