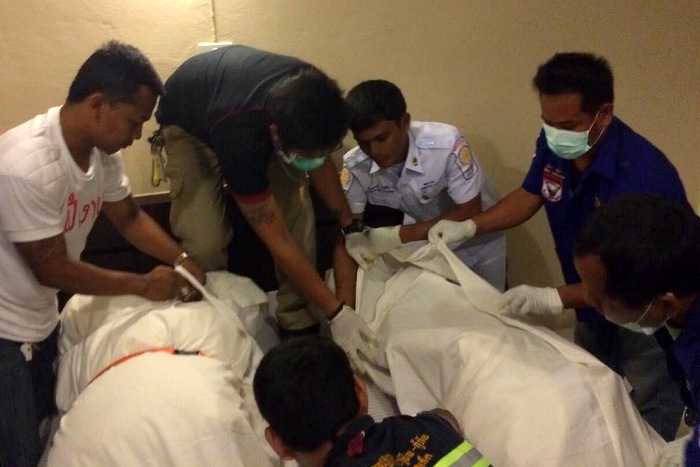 PHUKET: Police have yet to rule out foul play in what appears to be a murder-suicide by a Trang official at a Patong hotel yesterday.

The body of Yuwadee Sriket, 29, was naked on the bed, covered by a bedspread.

“We believe she was strangled, as we found a belt on the floor near the bed that matched the markings on her neck,” Col Pratuang explained.

Ms Yuwadee, from Trang, was a cashier at a hotel in Patong, which police declined to name.

Prasit Intharo, 43, a councilor of the Wang Maprang Nuea Tambon Administration Organization (OrBorTor) in Wang Wiset, Trang, was found dressed only in his underpants. He was hanged by a shirt tied to a curtain rod.

Officers also found a note apparently written by Mr Prasit, apologizing to his son and family for his “mistake”. It went on to say that he had left them 10,000 baht in a Patong bank account.

“I love you all, my children,” he allegedly wrote.

Mr Prasit and Ms Yuwadee checked-in at the hotel at about 1am yesterday for a one-night stay.

The bodies were discovered by a maid at about 2pm, when she entered the room after the couple failed to check out on time, Col Pratuang confirmed.

The bodies of both Ms Yuwadee and Mr Prasit were taken to Patong Hospital to confirm the cause of death.

“Our presumption is that this is a love-affair tragedy, due to the note left by Mr Prasit and the hotel staff confirming that he had stayed at the hotel before with Ms Yuwadee,” Col Pratuang explained.

“However, we have yet to close our investigation. We are still considering all possibilities of how and why they died, and the nature of the relationship between Mr Prasit and Ms Yuwadee.”