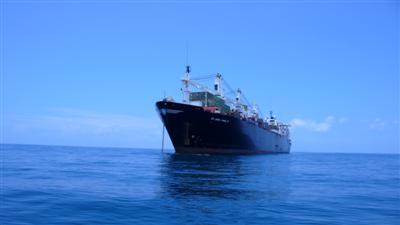 The privately owned Danish-built ship Cpl. Louis J. Hauge Jr has been adapted for it’s special load-carrying role to serve as a floating warehouse for the US military. It has been stretched by 150 ft and can roll off equipment onto lighterings so cargo can be delivered anywhere, said Captain Glenn Bond, the crew leader.

“We were at Saipan up by Guam and now we are part of a SEACAT training program for 10 Asian nations to join in role-play simulations,” he said.

Edward E. Baxter, the Public Affairs Officer for Far East activities for the Military Sealift Command (MSC) Pre-positioning Program, told the Gazette: “The fleet is an element in the US’s triad of power projection into the 21st century – Sea Shield, Sea Strike and Sea Basing. This is a flagship of a squadron of 10 boats that can support 18,000 marines for a month with everything they need.

“We are here for a little R&R before we continue tomorrow on a week-long annual SEACAT anti-terrorist exercise to help train the coastguards of several nations in this area.

“These nations learn to work together in terrorist scenarios not only dealing with pirates trying to get on vessels, but also how to board and search vessels suspected of smuggling contraband,” Mr Baxter added.

“In this year’s cat-and-mouse game, this ship plays the role of a cargo ship carrying illicit cargo. We will sail down to Singapore and test the ability of these countries’ national homeland security [efforts] and how well they can communicate and share information with neighboring nations, as well as brushing up on their interception skills,” he said.

Mr Parsh Singh’s Parsh Marine Service PTE Ltd – based in Singapore – is the agent for the vessel which is now hired out on a long-term contract to the MSC.

As well as carrying a plethora of military equipment ranging from Abrams tanks to Humvees and giant military trucks, the vessel was also loaded with containers full of refrigerated and dry food, – enough to feed 3,000 people for a month – more than a million gallons of fuel and 65,000 gallons of water.

Captain Bond said that it is a joy working with Thai forces and that the people of Phuket had been most hospitable. “The crew are happy to have R&R in Phuket,” he said.

Navy to beef up regional security