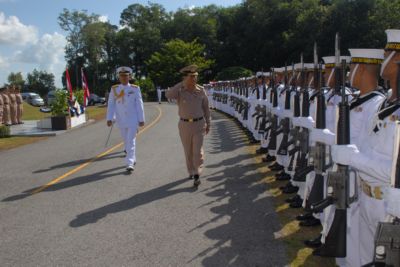 The patrols, which will have air and land-based radar support, are intended to boost security in regional waters.

The last reported act of piracy involving a Thai vessel was on April 28, when six armed men wearing balaclavas used a speedboat to board Thai fuel tanker Patara Varin 2 as it was about to enter the Singapore Strait. The pirates handcuffed the 13-member crew at gunpoint before making off with an estimated 13 million baht in cash and stolen goods.

Adm Sathirapan said the Navy will continue to arrest and repatriate poor Rohingya immigrants from Burma who enter Thai waters, most on their way to Malaysia in desperate searches for work.

The Phuket visit was also part of Adm Sathiraphan’s farewell tour, as he is set for mandatory retirement on September 30.

Adm Sathirapan was promoted to Navy Chief on October 1, 2005. As he commanded the Navy in a time of peace, he will perhaps be best remembered as the first deputy chief of the Council for Democratic Reform, which overthrew the elected government of fugitive former Prime Minister Thaksin Shanawatra in September 2006.

The Phuket visit was the last stop on his farewell tour, following a visit to the Songkhla-based Second Naval Area Command the day before.

Phuket plays its part in War on Terror