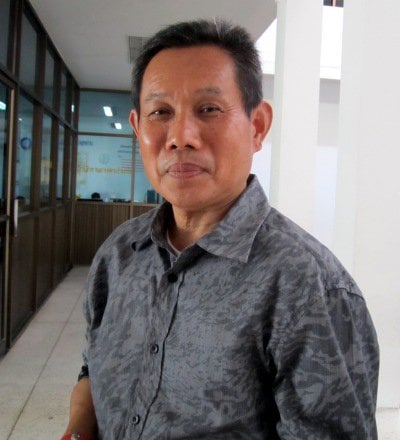 PHUKET: Love is in the air at the Muang District Office, where workers expect to issue marriage certificates to about 150 Phuket couples on Valentine’s Day.

Phuket Muang District Chief Supachai Pochanukul told the Phuket Gazette, “We first started paying special attention to how many certificates we issued on Valentine’s Day in 2010, when I started working here.”

“We believe this year we will have about 150 couples, which is a lot more than the one or two couples we process on an average day throughout the rest of the year,” he added.

The couples seeking state certification of their relationships cover a wide range.

Some are bright-eyed young couples, others are long-term partners who have finally decided to tie the knot legally. Some are even formerly married couples who divorced and then decided to remarry, he explained.

“I am glad people see marriage as important. What we give them isn’t just a piece of paper. The marriage certificate bestows the couple with all the legal rights that come with marriage,” Mr Supachai said.

Though next Tuesday is a normal working day at Muang District Office, the team there fully supports the Valentine’s Day marriages and even prepares gifts for the couples, he said.

“Last year we gave a little brass lamp to each couple to wish them well,” he said.

“We will extend working hours on the day to cover all the marriage couples,” he added.

Though some people choose to get married while participating in extreme sports like skydiving or scuba diving in Trang, [most] people come to be wed in Phuket because of its beauty, said Mr Supachai.

Mr Supachai was also pleased to inform the Gazette that there was no record of any couples filing for divorce on Valentine’s Day since he took over as District Chief.