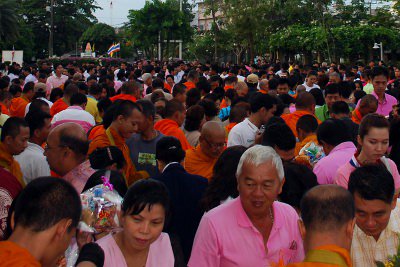 PHUKET: Thousands of people turned out at Queen Sirikit Park for the morning service to honor the 84th birthday of HM King Bhumibol Adulyadej today.

Offering their blessings were 85 monks from temples across Phuket as well as Phuket Governor Tri Augkaradacha and his wife Mrs Nalinee, who is also president of Phuket Red Cross.

Proceedings began at 7am, with wellwishers offering food to monks as a way of making merit in honor of His Majesty.

As part of the continuing the celebrations, Governor Tri will lead the handing out of 840,000 cloth bags at Phuket Provincial Hall at 2pm.

Other festivities to honor His Majesty’s birthday continue across the island today, including the first-ever Phuket World Musiq Festival and first day of racing begins today in the Phuket King’s Cup Regatta (see footage here from PGTV).

Click here for a list of just some of the events being held across Phuket today to honor His Majesty’s 84th birthday.