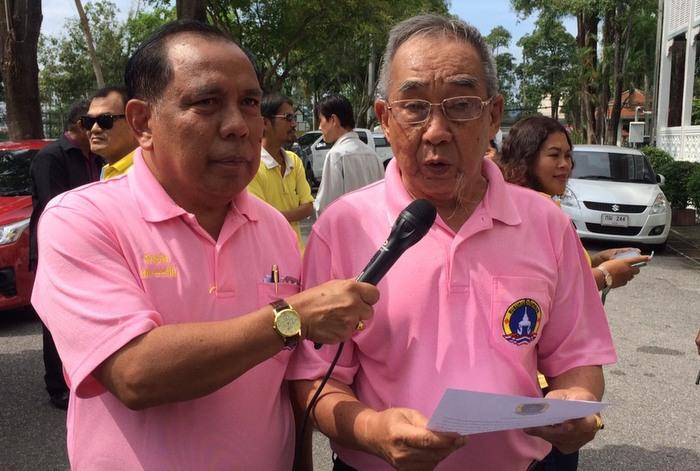 PHUKET: About 100 Phuket locals gathered at Provincial Hall this morning to protest comments made by the recently appointed United States Ambassador to Thailand, Glyn Davies, about the increase in lese majeste sentences under the National Council for Peace and Order (NCPO).

“Ambassador Glyn Davies gave a public speech on Wednesday at the Foreign Correspondents’ Club of Thailand in Bangkok that imposed on the sovereignty of Thailand,” said Mongkol Rattana, the head of the group that goes by the name ‘Khon Rak Nai Luang Changwat Phuket Club’ (Phuket People Love The King). “We would like officials to respond to his statements in order to protect the honor and sovereignty of Thailand.”

The group of protesters submitted a letter to Governor Chamroen Tipayapongtada, asking that their complaint be delivered to the Minister of Foreign Affairs.

The lese majeste law is designed to protect the monarchy from defamation, as members of the Royal Family are unable to sue offenders themselves, Prime Minister Gen Prayut Chan-o-cha told The Nation on Friday.

The Prime Minister’s comments were a direct response to Amb Davies voicing his concerns about the increase in convictions for lese majeste under the post-coup administration.

On Friday, PM Prayut explained that foreigners appeared to have no understanding of the law, stated in Article 112 of the Penal Code, despite repeated attempts to explain it to them.

Amb Davies had previously asserted that no one should be jailed for peacefully expressing his or her opinion.

On Saturday, about 200 people gathered outside the embassy in Bangkok holding placards with the messages ‘This is Thailand, not the USA’ and ‘Go, go home’ (story here).